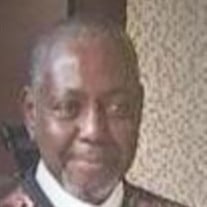 Mr. Aldawson Shipmon age 69 of Rowland, NC on Sr. transitioned to his Eternal Home on Thursday night, February 11,2021 at UNC Southeastern Health in Lumberton, NC. He graced the world with his presence on October 24,1951 to John Archie Shipman and Mary Shipmon (McKoy). He graduated from Rowland Southside class 1970 and attended Robeson Community College for electrical technology. At a later age, he joined All Nations Church of Jesus, Inc., pastored by Pastor Janice M. Shipman, where he gave his life to Christ. Aldawson was a beloved and devoted father, grandfather, brother, uncle and was loved by all who knew him. He loved fishing, hunting, and was gifted to fix anything, but his specialty was mechanic work. He enjoyed spending time with his children and grandchildren fishing and hunting. He was known for his mechanical skills countywide. He was a spiritual man and saw the Glory of God as he worshipped with his children during his final days. His long battle on earth has ended and now he is fighting in God’s army. He will be deeply missed by his family, friends and all who knew him. His beautiful life will forever be cherished in the life of his children: Nicole (Roy)Thomas Jr., Aldawson Jr (Christy) Shipman, both of Rowland, NC, Quentin (Myra) Shipman, Ex-wife Maggie Shipman, both of Fairmont, NC, ten grandchildren and one grandchild preceded in death, three brothers: John Calvin (Cynthia) Shipman, Ricky Shipman both of Rowland, NC, Ray Shipman (preceded in death), six sisters: Diane (Devon) Brown (preceded in death) Rowland, NC, Queen (Carl) Page, Mitchellville, MD. Pastor Janice Shipman, Rowland, NC Debra McCallum (preceded in death), Shelia (Louis) Friedli, Emmitsburg, MD, Angela Shipman, Fayetteville, NC a host of aunts, uncles, nieces, nephews, cousins and many friends. Professional Services entrusted to - Colvin Funeral Home, Lumberton, NC.

Mr. Aldawson Shipmon age 69 of Rowland, NC on Sr. transitioned to his Eternal Home on Thursday night, February 11,2021 at UNC Southeastern Health in Lumberton, NC. He graced the world with his presence on October 24,1951 to John Archie Shipman... View Obituary & Service Information

The family of Aldawson Shipmon created this Life Tributes page to make it easy to share your memories.

Send flowers to the Shipmon family.