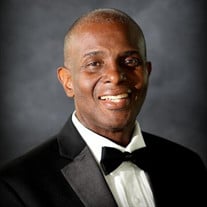 Alfonso (Al/Ricky) Ferguson, Sr. was born on October 16, 1962 to the late James A. Ferguson of Cross SC and Mary L. Ferguson of Miami FL. He peacefully entered into eternity on April 25th, 2021. Al was a graduate of Miami Northwestern Senior High, while in school he worked at the Fontainebleau Hotel training to be a chef. He graduated College with an AS in Accounting. He earned a BS in Health Administration and a MS in Organizational Leadership. He went on to work in the Medical Field, ending his career in Fayetteville, NC at Salient-CRGT where he worked in Logistics. Al dedicated his life to the Lord at an early age and served the Lord until death. He worked and served in the Church in many roles from: singing in the choir, teaching Sunday School, and serving as Armor Bearer to Apostle Ford. Al was joined in holy matrimony to the love of his life, Marie Richards on June 15, 1996 in Miami, FL. The union was blessed with two children and three foster children: Alfonso Jr., London, Anastasia, Amia and Jahmere. He was preceded in death by his father-in-law, Joshua Richards and brother-in-law, Marvin L. McMillian, Sr. He leaves to cherish his loving memories, his wife Marie of 25 years; son, Alfonso, Jr. in OH, daughter, London in NC, three foster children: Anastasia, Amia, and Jahmere in NC; mother, Mary Ferguson; two brothers, Willie J. Sims and Reginald Ennett (Kathia) and three sisters, Barbara Richards, Linda McMillian and Ronda Wiggins (Jeffery); mother-in-law, Carmen Richards; five brothers-in-law, Elricka Richards (Marie), Maxwell Richards (Karen), Lynden Richards, Patrick Richards and Kevin Richards (Nova) and two sisters-in-law, Dian Richards and Ann Smart and a host of aunts, uncles, nieces, nephews and other relatives and friends.

Alfonso (Al/Ricky) Ferguson, Sr. was born on October 16, 1962 to the late James A. Ferguson of Cross SC and Mary L. Ferguson of Miami FL. He peacefully entered into eternity on April 25th, 2021. Al was a graduate of Miami Northwestern Senior... View Obituary & Service Information

The family of Mr. Alfonso Ferguson Sr. created this Life Tributes page to make it easy to share your memories.

Send flowers to the Ferguson family.