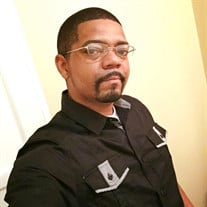 Andray Sharif Newkirk, 41 of Norfolk, VA. Andray transitioned on the evening of December 18, 2021 at Sentara Heart Hospital in Norfolk, Va surrounded by family and friends. Andray was born in Jersey City, New Jersey on October 30, 1980 and moved to Atlantic City, NJ as a baby where he spent most of his early teen years. In 1995 Andray and his family moved to Spring Lake, NC where Andray attended Western Harnett High School and Pine Forest High School. In January 1999, Andray and his family moved back to New Jersey, then shortly after relocated to Brooklyn, NY. Andray was employed at Macy’s Department Store and Homeland Security with his favorite Aunt Pat until he enlisted in the Navy in April 2004. Andray served a total of 17 years in the United State Navy, Service Branch of the United States Armed Forces. Andray held several roles while serving in the Navy. Some of the roles he performed were an Independent Duty, Postal Clerk, Recreational Supply Unit, Technical Specialist and Expeditionary Force-Combat Skills. Andray received numerous medals, decorations, badges and certifications for his service such as Afghanistan Campaign Medal, Good Conduct Medal, Global War on Terrorism Expeditionary Medal and Global War on Terrorism Service Medal to name a few. By being in the Navy, it gave Andray the opportunity to combine two things that he really loved doing, such as traveling and providing his service to the United States Navy. Although he loved being in the Navy, Andray was looking forward to retiring. Andray would often joke about once he retires from the Navy, he will begin to start his hair journey of growing locs. Andray was a very adventurous person. Andray wasn’t afraid to try new adventures, actually he welcomed them. Andray was so adventurous and determined, he wrote himself a list of every place he wanted to travel to. Andray did travel to Greece, Costa Rica, Cuba, Dominican Republic, Philippines, to name a few. In true Andray fashion, he traveled to every place he wanted to go except for Japan and Brazil. Although Andray didn’t have kids in human form, Andray did have two kids that were his pride and joy. His two daughters are Envy, his car and Ekko , his motorcycle. When Cynthia (Andray’s mom) went to visit him in the hospital, the first thing he had asked her was “how are my kids doing”? (LOL) Andray loved his family, especially his mom, sister, two nephews, niece and special cousin Atiyah (Mooch). Andray was very much his own person and did not imitate or copy anyone. He did his own thing, by his own rules. Andray was such a giving person. He would help anyone out by giving words of wisdom, advice, mentorship or just being there anyway he could for his family and friends. Andray had the best sense of humor. He would always crack jokes and play around. When Andray saw that one of his family members or friends were having a bad day, he would give words of encouragement and display acts of kindness towards them. Andray’s favorite lines to say “It is what it is”! “Keep pushing”! “You got this”! Andray wanted everyone around him to have a good time no matter what. Andray was a very determined man. Once Andray made a plan, he would see that plan through to the very end no matter what obstacles came his way. Andray chose his friends wisely and they made a great choice by being his friend as well. Andray’s friends weren’t just friends, they were his family. Andray and his friends had each other’s backs and never once judged one another. They stood by each other through the good and the bad. Andray leaves to cherish his memories: Cynthia Newkirk (Mother) Melvin Taylor (Father) Brandi Newkirk (Sister) Zaequan Vaughn (Nephew) Zamir Newkirk (Nephew) Zanayah Newkirk (Niece) Betty Newkirk (Aunt) and Fred Britton (Uncle) First Cousins: TeAusha White, Tomika White Martin, Gena White, Daunisa White and Trishana White and a host of other family and friends. Best Friends/Brothers: Lamarion Richardson (Joe), Tyrone Williams (RIP), Gerald Bowers, and Jay Camargo (Britney Camargo) A special thank you to my niece TeAusha and his bestfriends Jay and Britney for giving your support and love to Brandi and I at Sentara Heart Hospital on December 18,2021. We would not have made it without you. Thank You. Thank You to Tomika for her prayers, support and shoulder to cry on. I thank God for sending you all, our way in our time of need.

The family of Mr. Andray S. Newkirk created this Life Tributes page to make it easy to share your memories.

Send flowers to the Newkirk family.