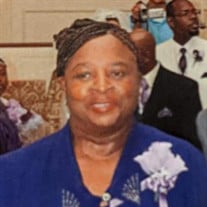 Barbara Ann Robinson McLean was born to the late Willie Robinson and Betty Mae (Tucker) Robinson on March 18, 1950. She entered into eternal rest on Sunday, November 29, 2020 at Cape Fear Hospital, after a brief illness. The early years of her life were shared closely with her five siblings, four of whom (Dennis, Michael, Phyllis and Linda) are predeceased. During these years Barbara also enjoyed spending the days with her grandmother, Leanna; great grandmother, Edgie; aunts, uncles and cousins. With her mother, she attended Mt. Zion A.M.E. Zion Church, previously known as “Flee Hill”. As a student at E. A. Armstrong School, where she attended from first through twelfth grade, she gained and built many lasting friendships, graduating with the class of 1969. After graduation from high school she made the decision to remain in the area and she found gainful employment at a group home. Over the years she also worked as a cook, crossing guard and a caregiver. She was the matriarch of the family!! Believing that she had received a call from the Lord to spread the gospel, Barbara spend several years preaching, evangelizing and exhorting locally and in other surrounding areas. Barbara was a member of Straight Gate Bible Way Church, where she was very fond of her church family. She was married to Elbert Jackson of Eastover, NC who is deceased. Later she was blessed to rekindle a bond from her teenage days and was united in marriage to Bobby McLean of Linden, NC who also preceded her in death. She leaves to cherish her memory, her brother, Howard Glenn Robinson (Kona) of Fayetteville, NC and one nephew, Dennis Robinson, Jr. of the home, a host of nieces, nephews, cousins and friends. Barbara Ann came to realize that she had a “light” to share with her fellow man. She was lively, gregarious and would not hesitate to boldly “have her say”! She faced life’s challenges with courage and determination. Although she did not give birth to children of her own, she willingly shared her love, wisdom and many of life’s lessons with her nieces, nephews and others. Barbara provided special care and assistance to her nephew, Willie Dennis Robinson, Jr. and shared her home with him at various times. Among her many talents were cooking, wardrobe coordination and storytelling and to the surprise of many she had a beautiful singing voice. Over the years she learned not only to bravely stand-up for herself,but just as importantly to advocate for others who were in need Even though her mobility was sometimes altered, that did not deter her gregarious nature and her ability to evoke joy and fun with others. She was “full of life” and demonstrated a deep belief that we should let our God given light shine. He favorite saying was “sho-nuff the truth” and “shugg”.

Barbara Ann Robinson McLean was born to the late Willie Robinson and Betty Mae (Tucker) Robinson on March 18, 1950. She entered into eternal rest on Sunday, November 29, 2020 at Cape Fear Hospital, after a brief illness. The early years of her... View Obituary & Service Information

The family of Ms. Barbara Ann McLean created this Life Tributes page to make it easy to share your memories.

Send flowers to the McLean family.