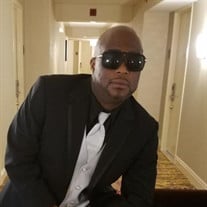 Brian Keith Baker, a loving son, devoted husband, father, grandfather, and friend passed away on January 26, 2022, at his home. Brian was born to the late Joyce Marie Baker and Brian Keith Lundy on November 17, 1975, in Somerset, New Jersey. Brian attended school in Somerset and Burlington, NJ. He relocated from New Jersey to North Carolina in 2012 where he met and married Michelle Colbourne on August 30, 2014, and from this union they had their son Deonte “DJ”. Brian was no stranger to hard work and was an exceptional provider for his family. He was employed at the Embassy Suites Hotel where he was loved by all who interacted with him. Throughout his life, he has impacted many lives of his family and people that he met. Brian was a very outgoing, funny, and loving person and could light up a room with his smile and funny antics. His famous sayings were “I’ve got a plan” and “Come on man”. He was very family-oriented and especially loved his sons, and his entire family who are missing him dearly. He will be sorely missed. Brian is survived by his wife, Louise Michelle Baker; sons Brian “BJ” and Deonte “DJ” Baker; brothers Hassan Fuqua, Jamar Porter, Jamal, Mikal and Wali Lundy and Llewelyn Radford; sisters LaShunda Monk-White, Shamina Jones, Cheri McMillian and Tamela Nasim; special aunts Sharon Porter and Jeannette Monk, aunts, Carol McMillian, Patricia Witherspoon, Connie Varlow and Linda Baker; uncles Peter Lundy, Ismail Rahman, Eric McMillian, Greg Witherspoon and William Porter; sisters-in-law, Andrea, Eliza and Anjoinette Lundy, and Carol Rhymer, brother-in-law, Maurice Maynard, Sr., and mother-in-law, Maude Colbourne; adopted son, La’Trell Jones, special friends, Eugene Hamilton, Dac Johnson, Calvin Halyer, Samuel Miller, Te’Quan, and the entire staff at Embassy Suites Hotels. He is also survived by a host of nieces, nephews, and cousins too numerous to mention. Brian was preceded in death by his grandmothers, Bernice M. Stafford and Addie Baker, his brother Shaheed Lundy, grandfather, Willie Baker, uncles, Lacel Monk, Wayne Lundy and James Varlow and special cousin, Lamar Prim.

The family of Mr. Brian Baker created this Life Tributes page to make it easy to share your memories.

Send flowers to the Baker family.