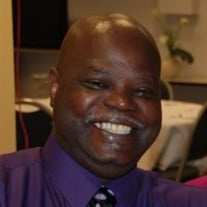 On Monday, December 28, 2020, Charles E. Wagner Jr., loving son, husband and father of four children, passed away at age 56. Charles E. was born on April 12, 1964 in Fort Belvoir, Virginia to Charles and Bessie (Rowe) Wagner Sr. When Charles E. was born, his older sister, Terri considered him her real life “Chatty Charles E.” doll. His two older brothers picked on him, played with him and taught him how to play sports. From elementary to high school age, he played in many sports. By the time he attended high school he was All-State Wrestling Champ. In 1982, he graduated from Gar-Field Senior High School, Woodbridge, Virginia. After graduating, he joined the military and served in the Army from February 1, 1984 until January 1, 1987. After leaving the service he worked several landscaping jobs in Northern Virginia before getting injured on a jobsite. During his recovery he chose to focus on his family life. In 1988 he was blessed with his first child, a daughter, Jennifer. In June of 1990, his second daughter was born, Shawntae`, and in September of 1991 his son was born, Charles Mychael. In November of 1993 his youngest and last daughter was born, Shannon. Once recovered from his injury, Charles E. worked at a couple local grocery stores, On July 4, 2002, he married Kelly Hessig-Wagner. They continued to live in Northern Virginia until 2008 when they relocated to Southern Georgia. Charles E. and Kelly spent nine years in Newnan, Georgia. Charles E. began working for Lowe’s while in Newnan. In 2017, Kelly’s job relocated them, once again, to what would become their forever state, North Carolina. They made their final move to Raeford, North Carolina where he found his forever home. Charles E. continued to work for Lowe’s and enjoyed his new home until he came to pass. Charles E. had a passion for cooking and grilling. He also loved to watch all kinds of sporting events but mostly his favorite football team, The Washington Redskins. Over the years he collected a lot of Redskin’s memorabilia. He was also an avid music lover and could always be heard listening or singing to his music while he cooked or grilled. He was known for his quick wit, infectious smile, sense of humor, and his kind and compassionate spirit. Charles E. was preceded in death by his grandparents, Elmer Wagoner, Retha Russ, Willie Fred Rowe, and Nellie Ruth Newell, sisters, Johnetta Manning and Zephyr Wagner, nephew, Ricky Blaylock, a grandson, Baby Wayne, and many aunts and uncles. He is survived by his parents, Charles and Bessie Wagner Sr., wife, Kelly Hessig-Wagner, his four children, Jennifer Wagner (Markym), Shawntae` Wagner, Charles Mychael Small (Shayelin), and Shannon Sparks (Alastair), his grandchildren, Giovanni, Shyanne, Violet, Charles Mychael Jr., Ja`Mychael, Ky`ree, Baby Kym, and Lilianna, his brothers, Mike Wagner (Helen) and Rudy Wagner, sisters, Jaquelyn Blaylock (Charles) and Terri Smith (Keefe), several aunts, a host of cousins, nieces and nephews, and many close friends and colleagues. As well the many young people who looked at him as a father figure.

The family of Mr. Charles Elmer Wagner Jr. created this Life Tributes page to make it easy to share your memories.

Send flowers to the Wagner family.