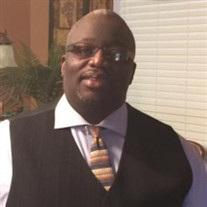 Clinton Edward Smith was born January 25, 1958 in Brooklyn New York. His parents Nathaniel L. Smith and Evangeline Smith both preceded him in death. Clinton was blessed with the ability to assist and serve others. Throughout his life he accomplished great things with very few resources. He graduated from E. E. Smith High School in 1977 and later received his Bachelor’s Degree from William Penn University in Iowa majoring in Recreation. He was a member of Tau Kappa Epsilon. Clinton was passionate about children and their future education, helping them prepare for college. Students enjoyed his knowledge and love for THEIR education. Clinton was a school teacher and a member of a non-profit organization for many, many years East New York Kids Power founded in 1996 in Brooklyn, New York. While a part of this non-profit, he raised funds in order to take juniors and seniors on a tour of HBCU ‘s (Historically Black Colleges and Universities). Clinton was always interested in getting children into college helping them with financial aid and scholarships. He told a couple students if they complete their education, he would come to graduation and he did. Clinton was a Boy Scout for many years and later became a Scoutmaster. He also coached football and basketball for many years and tutored students helping them achieve their educational goals. Clinton founded the Judah Serrell Smith Youth Foundation named after his late nephew. This organization focused on growth for youth. He was also a Counselor, Parent Advocate and Coordinator in the Kings County school system, Brooklyn, New York. Clinton had the ability to keep us all in line with words of encouragement, wisdom and comfort. He taught his nieces and nephews many lessons through the school of hard knocks. He was an all around good guy. We have had the the privilege to know Clinton our whole lives. One major thing he had was faith and trust in our Lord. Clinton has gone to heaven and we know there was much celebration there for he is with Christ our Lord. He is being greeted by all our loving family whom he has missed so much. One of the many characteristics of Clinton that still puts a smile on our face is the way he was able to so easily make friends with the people that came into his life. Whether it was the neighbor next door, or the mailman or just a person he may have met at the store; no one was ever really a ‘stranger’ to him. He had a wonderful way of making them the center of his time. The 62nd chapter of his successful life ended on Tuesday, January 19, 2021. He leaves to cherish his memories one brother, Anton Van Lewis-Smith (Debra) of Fayetteville, North Carolina, 2 sisters, Natalie Williams (Fitzroy) of Port St. Lucie, Florida and Wendy Bell (Dennis) of Harker Heights, Texas, Khytish (David) Graham and Thaddeaus Griffin of Fayetteville, NC; 1 step brother, Michael Clinton Dickerson of Germantown, MD; Clinton had 12 nieces and nephews who loved him dearly Kristie Dunn, Kala Dunn, Joshua Anton Van Smith II, Maria Lewis-Smith, Maurice Smith, Q’Markis Brooks, Bjay Simmons, Brittani Simmons Bolden, Kayli Bell, Aaron Graham, Imani Griffin and Jurnee Evans. A niece and nephew proceeded him in death Serrell Smith and Niquita Brooks. Clinton had 1 great nephew, Caleb Reid and 2 great nieces, Jaliyah Smith and Ni’Hani Little.

Clinton Edward Smith was born January 25, 1958 in Brooklyn New York. His parents Nathaniel L. Smith and Evangeline Smith both preceded him in death. Clinton was blessed with the ability to assist and serve others. Throughout his life he accomplished... View Obituary & Service Information

The family of Mr. Clinton Edward Smith created this Life Tributes page to make it easy to share your memories.