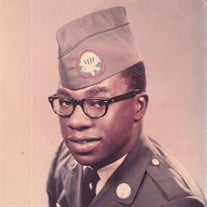 David Thomas Welcher departed this life on Thursday, January 28, 2021. He was a native of Montgomery, Alabama, but made his home in the Fayetteville community for more than 47 years. David joined the United States Army in December 1965 and served our nation with honor and distinction during two tours of Vietnam and the Grenada Campaign with the renowned 82D Airborne Division. He was awarded the Bronze Star Medal for meritorious service in combat, February 16, 1972, eleven days after marrying his bride. Following his retirement from active duty in December 1992, David continued to serve the nation in the Federal Civil Service before entering the technology private sector. He was instrumental in establishing Northern Telecom as the first company in the industry to deliver a complete line of fully digital telecommunications products. The capstone of his private sector career was with the multinational telecommunications equipment firm Lucent Technologies, and General Dynamics global communications systems division, where he frequently traveled to Europe and Asia on assignment. David remained an active and dedicated member of the United States Army Signal Corps Regimental Association, was a Charter Member of the General Dennis L. Via All Airborne Signal Chapter of the 82nd Airborne Division Association, and the Disabled American Veterans Chapter 46, where he helped to empower fellow veterans to lead high quality lives with respect and dignity. David demonstrated the importance of enjoying ordinary moments (especially with his grandchildren and great grandchildren), creating memorable experiences and honoring family and friends by keeping his big smoker barbeque and master vintage album collection at the ready for an impromptu celebration. To his nieces and nephews he was affectionately referred to as “Uncle Bud” and “Uncle DW,” however, his most cherished honorific was “Papa.” He was predeceased by: his parents, David and Carrie M. Turner Welcher; beloved granddaughter, Jasmine McCreary; and brothers, Edward Turner and Bennie Turner. David leaves to cherish his memory: Ada, his beloved wife of 49 years; daughter and son-in-law, Tammy M. and Lester C. Moore; daughter, Karen Adamson; sons, James H. McCreary, Jr. and Christopher R. McCreary; daughter-in-law, Claudelle McCreary; godson, Glen Walker; sisters, Carolyn Welcher Mosely and Minnie Ruth Abner; brother-in-law, Clarence Mosely; nine grandchildren, six great-grandchildren and a host of other relatives and friends.

David Thomas Welcher departed this life on Thursday, January 28, 2021. He was a native of Montgomery, Alabama, but made his home in the Fayetteville community for more than 47 years. David joined the United States Army in December 1965 and served... View Obituary & Service Information

The family of Mr. David Thomas Welcher Jr. created this Life Tributes page to make it easy to share your memories.

Send flowers to the Welcher family.