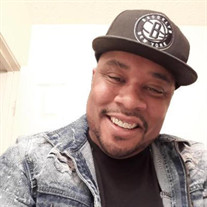 Heaven’s gates opened and welcomed Dennis R Lee, home on August 28,2021. Dennis was born on June 10, 1982, in Rochester, New York to Constance Walker and Dennis H. Lee. He was affectionately called “Third” by his friends. Dennis attended Wilson Magnet High School in Rochester, New York. Always having a strong work ethic, Dennis’ dream was to become a Head chef. He carried in his wallet scripture from Matthew 7:7 that read “Ask and it shall be given to you; seek, and you will find; knock, and it will be opened to you.” Dennis wrote on the bottom of this scripture – Head chef which served as his reminder to focus on his quest in the culinary arts. He used his talents by creating meals and honed those skills by working in the cafeteria of Strong Memorial Hospital in Rochester, New York for many years. Upon moving to North Carolina with his family, he accepted a position at Fayetteville State University and worked as a cook in their cafeteria. When an opportunity availed itself, he transitioned his work in the service field and accepted a position at Cape Fear Valley Medical Center as a housekeeper. Dennis enjoyed life and lived it to the fullest. Not only did he enjoy working in the service industry, but Dennis loved fishing, cooking and grilling for others and watching various movies and documentaries in his spare time. He had a giving spirit and huge heart, always considerate of others. Dennis loved to joke. When he needed anything of someone his conversation would start by him saying to the individual “You look nice today”, waiting for a reply before he asked his question. Dennis will be greatly missed by his family and friends. He is preceded in death by his parents, Dennis Lee and Constance Walker. Dennis leaves to mourn his wife and best friend, Tyshara McMillan; his children, Samiyah, Dennis, Silver, Deneja all of Rochester, New York and Sha’Niaha of Fayetteville, North Carolina; his stepchildren, DaCori Davis and Jahmari Davis of Fayetteville, North Carolina; his siblings, Celeste (Terrell) Loveday, April Lee of Rochester, Bennie Wright, and Thomas Lee, all who reside in Rochester, New York. He also leaves to mourn his maternal grandparents, Bennie and Carolyn Walker of Fayetteville, North Carolina; his paternal grandmother, Helen Lee; his stepmother, Athena Lee of Rochester, New York and mother-in-law, Jana Merritt and father-in-law, Carlas Merritt of Rochester, New York, and one niece, several nephews and a host of other relatives and friends.

The family of Mr. Dennis R. Lee created this Life Tributes page to make it easy to share your memories.

Send flowers to the Lee family.