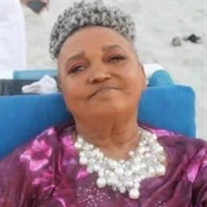 Diana Jones Bilal affectionately known as Diane was born November 23, 1949, in New York City, New York. She entered Heaven’s gates on Friday, October 22, 2021, at her residence. Diane was born to her parents, Leroy Jones and Lillian Wiggins. She received her formal education in the New York City Public School System receiving a High School Diploma. She attended Fayetteville Technical Community College receiving an Associate Degree in Accounting. In 1969 she met the love of her life Samed Bilal in New York City. They lived in the Bronx until 1977 relocating to Spring Lake, North Carolina to build a home to raise their children. They shared a wonderful loving life together. Samed was her knight and shining armor, protector, provider, and confidant. Upon relocating to Spring Lake, she began working for the Cumberland County School System as a Head Cook. Diane was an achiever which led to her next employment at the Department of Defense as the Head Cook for DEFAC. Her Associate Degree in Accounting led to her final position at the Ft. Bragg Commissary as the Lead Cash Clerk until her retirement in 2005. She was a dedicated mother, sister, grandmother, aunt and friend. Whenever you spoke to her, you were the most important part of her life at that moment. You would always have her undivided attention. Her love was deep and wide. She wore the love of her children, grandchildren, great grandchildren, nieces’, nephews’ and their friends alike. Diane was preceded in death by her husband Samed Bilal; father, Leroy Jones, mother, Lillian Wiggins; Sister, Beatrice Wiggins; four brothers, Edward Wiggins, Clifford Wiggins, Robert Wiggins, and Charles Wiggins. Diane leaves to cherish her memory her children, Terrance Bilal (Renee), Jetaune Glover (Cottrell), Yvette Wiggins, Chyllaum Foster (Dwayne), Mischaum Bilal, Tamiko Council, Hashim Bilal (Nichole), Waleed Bilal (Alicia), Shauniko Smith (Brian), and Hassan Bilal (Chrystal); Sister, Iola Jones, twenty-eight grandchildren, twenty-two great grandchildren, Sister-in-law, Wanda M. Allen (John) and a large host of nieces, nephews and bonus children (her children and grandchildren friends).

The family of Diana Bilal created this Life Tributes page to make it easy to share your memories.

Send flowers to the Bilal family.