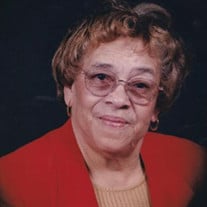 “May the life I’ve lived speak for me”… Dorothy Mae Baldwin, affectionately known as Ms. Dot, was born on March 27, 1931 in Robbins, NC to the late Curtis and Blanche Ritter. She peacefully transitioned to be with the Lord at her home in Fayetteville, NC on Wednesday, March 3, 2021. Dorothy attended Pinckney High School in Carthage, NC. She took great joy in attending her class reunions and remained in contact with several of her classmates throughout her life. Dorothy accepted Christ at an early age having joined Holly Grove Missionary Baptist Church in West End, NC, where she maintained her membership until relocating to Fayetteville, NC upon marrying her late husband, Lera D. Baldwin. Later, Dorothy became a dedicated member of Park’s Chapel Freewill Baptist Church, presently Kingdom Impact Global Ministries, where she served on both the Willing Workers and Convalescent ministries. Dorothy worked at the Confederate Women’s Home in Fayetteville, NC for numerous years as a caregiver for the elderly residents until the closing of the facility. She later worked at the Cumberland County Board of Education and Fayetteville State University in the custodial departments. Even into her more senior years, Dorothy would often selflessly assist as a personal care assistant to senior citizens, helping them with errands and other appointments. To know her was to love her. Ms. Dot never once met a stranger and with her kind-spirited, upbeat and hilariously comical personality, she regularly accepted and would be visited by a host of adopted sons, daughters, and grandchildren within her community. Her energetic zeal for life and her ability to get a prayer through are two of the many things those who knew her most intimately would remember and love about her. In her free time, she loved to decorate, read her Bible and work in her yard. She always had an affinity for fashion especially for clothes, shoes and “caps”. She left an indelible mark on everyone’s life that she knew. She was a loving wife, mother, grandmother and a dedicated sister and friend who always spoke kind words exemplified by her generous heart . Dorothy remained a true reflection of God’s love to all who came in contact with her. As we seek to find strength during this difficult time, we will always feel blessed to have had her as a part of our lives and even as much as we loved her, we know for certain that God loved her best. Those who were grateful to share many treasured memories are three children, Patricia Blackmon, Sandra Haskins and Reginald Baldwin (preceding her in death-Joel Vincent, Lera Douglas Jr. and Janet Marie); two sisters Betty Johnson and Georgia Dowdy (preceding her in death-Ruth, Alice, Uneeda, Bobbie, Geraldine); a loving son-in law (Marvin); a dedicated daughter-in-law (Brenda); eight grandchildren (Ebony, Benita, Demesha, Kevin, Regina, Precious, Jovon and Joel), and a host of great-grandchildren, great-great-grandchildren, nieces and nephews.

The family of Mrs. Dorothy Mae Baldwin created this Life Tributes page to make it easy to share your memories.

“May the life I’ve lived speak for me”…

Send flowers to the Baldwin family.