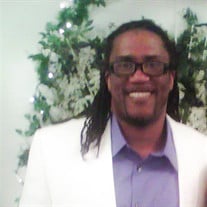 Mr. Edward Irvin Tolson, Jr., 54 was born into the union of Sgt. Edward I. Tolson, Ret. and Dr. Julie E. ( CSM Charles E.,Ret) Clark on October 17, 1967 in Wurzburg, Germany. He was given his wings on January 1, 2022 as his family escorted him on his way. He received his formal education from the Burlington County School Systems of NJ. He was a graduate of Pemberton Township High School, Pemberton, NJ and the Institute of Security and Technology-Law Enforcement Academy in Pittsburgh, PA. After moving to NC, he trained at England Truck Driving School of Asheville, NC. He earned a certificate for his sharpshooting skills from NC Firearms Training, Fayetteville, NC. He had a passion for music, laughter and traveling. He was a member and musician for United in Spirit and Faith Ministries, Fayetteville, NC. He was a quiet individual who kept his on council and judgements. He was a loyal friend and dedicated family man. As a youth was a participant of many associations to include The Boy Scouts of America and the Junior Air Corp of McGuire AFB, McGuire, NJ. He worked as a security officer for Wells Fargo Armored Services, Fayetteville, NC, and a Security Guard for Without Walls International Church, Tampa, Fla. before his first illness. After his stroke he drove trucks for North American Moving and Storage of Fayetteville, NC until his health ended his career. His favorite job, raising his children which included his two nieces. He had a special connection with them and taught them his love and passion for music & dance. He was well known for his playful demeanor and 'Break" dancing skills. He also had a special love for his dogs Badger and Kwanza, both preceding him. He is preceded by his grandparents Marie W. and Eunice M. Capers and Bessie V. and James W. Tolson, Special Cousin Jamel R. Tolson. His legacy will be carried on by his children Tashay M., DeShaun Q., DeAndre L., stepson Jerome M. Mclean, his parents Dr. Julie E and Charles E. Clark, his sister Dana Lavette, his nieces Nyia C. Lewis, Asia (Christopher) Wade, his grand-niece Madison E. Wade, His favorite cousins Gina (Kevin) Ray of Willingboro, NJ, LaTrice N. (Demont) Thomas and Rodney Conyer of Stevensville, MD, Godbrother Paul Thomas of Fayetteville, and special friends Dominant W. Smith of Lumberton, NC and Felicia Williams of Trenton, NJ., six uncles, five aunts and a legion of cousins and friends.

The family of Mr. Edward I. Tolson Jr. created this Life Tributes page to make it easy to share your memories.

Send flowers to the Tolson family.