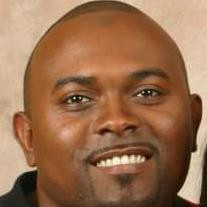 Ernest Baldwin Ernest Baldwin, affectionately known by his family as “Weasel” was born the second of a set of twins, October 26, 1980 to James Edward Baldwin and Mable Lene Boykin Baldwin both of Eastover, North Carolina. He departed May 19, 2021 in Fayetteville, N.C. Ernest attended daycare and preschool at First Baptist Church and was also very active in the young adult ministry. He was taught about the love of the lord at a young age and was Baptized at First Baptist Church under the late Dr Glen Holt. He graduated from Cape Fear Senior High School in 1999, where he was active in the Jr ROTC program. Ernest was known for being well mannered and always answered with a yes ma’am or no ma’am or yes sir or no sir. He was a hard worker. He worked from a very young age up until his departure with his twin brother, his father and his Uncle Roy with the family business and other odds and end jobs. He also worked delivering papers for the Fayetteville Observer, Labcorp and Tarheel Furniture. He loved working on computer and taking things apart and trying to figure out how to put them back together again. Sometimes he was successful in putting them back together, others well he would just say, I’ll come back to it later, “I know what I’m doing”. Ernest also enjoyed sports and hanging out with his family and friends. His favorite team was the Carolina Panthers. Ernest had a big heart and would share with you whatever he had. As a child his favorite source of comfort was a stuffed snoopy that he dragged with him everywhere, much like Linus from Charlie brown with his blanket. He carried it everywhere and the only way that anyone could clean it was to sneak it away form him in the middle of the night, but it had to be returned before daylight. He dragged this Snoopy everywhere until one day it “mysteriously” disappeared. He was proceeded in death by his elder brother James Earl Baldwin, whom he loved and admired. Ernest was previously married and of that union he was blessed with two children Makayla and MaKyle Baldwin both of Fayetteville, North Carolina. He leaves to cherish his memory two brothers; His twin Ernie (Pamela) Baldwin of Fayetteville, North Carolina and Manuel Baldwin of Virginia Beach Virginia, one sister Pamela (Frederick) Jackson of Hope Mills, North Carolina, a host of aunts, cousins, nieces, nephews one uncle and one great aunt. Words cannot express the sorrow we feel and the emptiness we feel from the hole in our hearts left knowing we will never get to hear your voice again. No more early morning phone calls in which you express your love, no more corny jokes where no one gets the punchline except for you and maybe Kandy. We want you to know that we will always remember and cherish the best of you. We miss you already. We Love you, Little brother.

Ernest Baldwin Ernest Baldwin, affectionately known by his family as &#8220;Weasel&#8221; was born the second of a set of twins, October 26, 1980 to James Edward Baldwin and Mable Lene Boykin Baldwin both of Eastover, North Carolina. He departed... View Obituary & Service Information

The family of Mr Ernest Baldwin created this Life Tributes page to make it easy to share your memories.

Send flowers to the Baldwin family.