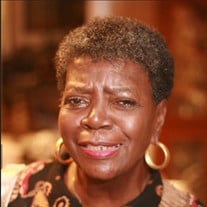 “For we know that if our earthly house of this tabernacle were dissolved we have a building of God, a house not made with hands, eternal in the heavens” 2 Corinthians 5:1 Esther Lane Gainey Long was born on April 22, 1941 to the late Roy and Lulu Gainey in Stedman, North Carolina. She was the youngest of her ten siblings who preceded her in death, five sisters, Elizabeth Inez Gainey Robinson, Callie Estelle Gainey Johnson, Mary Lucille Gainey Gordon, Betty Gainey McLaurin and Cusie Gainey. Five brothers Oscar H. Gainey(Jack), Arthur Royal Gainey Jr., Charles R. Gainey, Arthur P. Gainey and Willie Lee Gainey. Esther Lane Gainey Long transitioned from her earthly life and entered into her eternal rest on Thursday, September 2, 2021 at home. Esther was a graduated of Armstrong High School. She attended Fayetteville Technical Community College to enhance her administrative skills. She worked with the Department of Commerce Census, various daycares in the area, Lewis Chapel Daycare, Mom’s Daycare, US Army Daycare on base. She was a certified Realtor, was employed with MidSouth Insurance Agency, and for the past fourteen years she was employed with Home Instead Senior Care. Esther received numerous awards and certificates of appreciation and dedication for her work ethic. Esther was always helping people and her home was always open to help those that needed that special care. She enjoyed cooking meals and sharing them with her neighbors and friends. She was a nurturing, soft hearted dedicated person always pitching in and helping out. She would go out of her way to be there for others making a difference in her community and church. Esther was a faithful and dedicated member at Deliverance Temple Word Of Faith Christian Center for over 30 years under the leadership of the late Emeritus Bishop O.T. Johnson and now Pastor Annie Johnson. She was a part of the Missionary Ministry, and served with the Senior Citizens Program. Esther was married to Robert Leo Long and to this union she was blessed with a son Jeffrey Scott Long. He is her pride and joy, you could tell every time she talked about him. Esther had a Helps Ministry and she did it well! She served others and through her she allowed her light for Jesus to brighten others’ lives by being compassionate and caring towards those she came in contact with. Esther leaves to cherish her memories her son Jeffrey Scott Long (Matilde) of Fayetteville, NC now working in Kuwait, grandchildren Jamaal Robert and Jamika Estelle Long of San Antonio, Texas, a special friend Helen Mitchell of Fayetteville, NC, numerous nieces, nephews, cousins and friends.

&#8220;For we know that if our earthly house of this tabernacle were dissolved we have a building of God, a house not made with hands, eternal in the heavens&#8221;... View Obituary & Service Information

The family of Ms. Esther Lane Long created this Life Tributes page to make it easy to share your memories.

“For we know that if our earthly house of this tabernacle were...

Send flowers to the Long family.