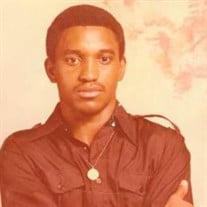 Frederick Watson was born June 10, 1961 to Alton and Mary Watson in Jersey City, New Jersey. He departed his life, July 7, 2021 at UNC Health-Southeastern Medical Center, Lumberton, North Carolina. He graduated from Fairgrove High School, June 6, 1980. After graduation, he enlisted into the US Army, April 1986 and received an honorary discharge. He had a love for sports, and received a Heavy Weight Boxing award, Frontline Brigade, and others. He attended Robeson Community College and received a Basic Law Enforcement Certificate. He was a ball of energy that was infectious. He always kept the tradition of exercising as if he was still in the Army. There was nothing that could hold him back in life. He loved to travel the world as much as possible, but his main objective was his family. That was the driving force that kept him going. There was no such thing as a stranger. Everyone was either a friend or brother. Preceded him in death was his father, Alton Watson, Sr. his loving sister, Saundra W. Graham. He leaves to cherish his memories his mother, Mary Watson, daughter, Kenyatta Locklear, St. Pauls, NC, brothers; Alton Watson, Jr. Durham, NC and Mark Watson of the home, special cousin who was very dear to him; Reggie Mason, New York, a host of other relatives and friend. Professional services entrusted to Colvin Funeral Home, Lumberton, NC.

The family of Fredrick Watson created this Life Tributes page to make it easy to share your memories.

Send flowers to the Watson family.