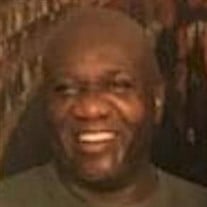 Garry Galbreath, affectionately known as “BB” was born on May 14, 1960 in Brooklyn, NY to Allene Cooper Galbreath and the late Roosevelt Galbreath. On March 3, 2021 Garry transitioned from Moore Regional Hospital in Pinehurst, NC to his Heavenly Home. As an infant Garry was lovingly adopted and raised by his Grandparents, Mr. Frederick Sr. and Mrs. Jetha Lee Cooper in Lumberton, NC, to Garry they we were “Ma and Daddy.” Garry received his education in the Robeson County Public Schools and graduated from Lumberton High School in 1978. He continued his education at Robeson Technical College and received a Certificate of Study. Garry decided to start a new journey in the United States Army. He found a place to soar and accomplished many things. Garry received a Good Conduct Medal, National Defense Medal and 3 Bronze Stars. After 10 years of service, Garry received an honorable discharge as an E5-Sergeant. After his Military Service, he returned home and he worked faithfully, at Buckeye Corporation until the company shut down. Garry grew up attending Hilly Branch Missionary Baptist Church where he ushered, enjoyed listening to the male choir and the teachings of Rev. Dr. Joseph H. Dunham. “BB” had a heart of gold for his family. There was nothing that he wouldn’t do for any of them. While he had many encounters of fellowships, gatherings and home cooked meals, he held his nieces dear to his heart. He affectionately contributed to their upbringing, genuinely instilling in them life lessons, heartfelt conversations and words of wisdom. Garry had an infectious personality and as a result had a plethora of friends. Garry always had a tenacious smile on his face when his cousin called him, “Uncle BB.” Garry was preceded in death by his father, Roosevelt Galbreath, his adoptive & biological grandparents Frederick Sr. and Jetha Lee Cooper, two brothers, Dwight and Jeffrey Galbreath and a Nephew: Javonte Galbreath. Aunts: Dorothy C. Addison and Annie C. Johnson. Uncles: Bill & Frederick Jr. Cooper and Willie Graves. He is survived by his mother, Allene Galbreath, His aunts, Helen Small, Rosetta Galbreath, JoAnn Graves, Cynthia Cooper, Shirley Cooper; both of the home. Uncles; Willie J. Cooper (Edna B. Charles Cooper (Bernell), Neal Cooper and Gregory (Vanzella), and Clyde Johnson. A special cousin/brother, Kenneth Addison; Nephew: Jaheim (Shatima) Galbreath; Great nephew: Noah Jeffrey Galbreath. God daughter Kira Baker, a host of cousins and friends. Our memory of Garry lives deep in our hearts and because of that, we don’t say goodbye, we say: Luke 23:43 “Truly I say to you, today you will be with me in Paradise.” John 16:22 “ So with you, Now is your time of grief, but I will see you again and you will rejoice, and no one will take away your joy. ' Professional Services entrusted to - Colvin Funeral Home, Lumberton, NC.

The family of Garry "BeBe" Galbreath created this Life Tributes page to make it easy to share your memories.

Garry Galbreath, affectionately known as “BB” was born on May...

Send flowers to the Galbreath family.