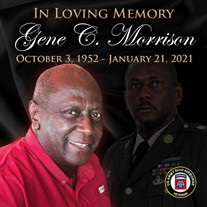 Gene C. Morrison, 68, passed away on Thursday, January 21, 2021, in his hometown of Fayetteville, NC. He was a retired Master Sergeant (with honors) in the United States Army. He was a devoted father, brother, uncle and friend. Gene was the second-oldest son of Gladys Irene Morrison and June Morrison. As a child, Gene was fun-loving, always willing to help others, and loved to play jokes on his siblings and daughter. He always joked that he had a big head because he had a big brain. Gene graduated from E.E. Smith Senior High School in 1970 and was encouraged by his mentors and neighbors to join the military in order to provide a secure future for his family. In 1971 he drove himself three hours to basic training in Fort Sumpter playing the one 8-track he owned, James Brown’s “Say it loud, I’m Black and I’m proud.” The light of his life, his daughter Latasha, was born in 1973. The military offered Gene opportunities to have a career and travel. During the 24 years he spent as a soldier, he was stationed in Germany, Fort Bragg, and Korea. He served as an ROTC instructor at John Hopkins University in Maryland as well as Lackland Airforce Base in San Antonio, TX. He loved the challenge and discipline that military life offered him and he was a proud member of the 82nd Airborne Division. He retired from the US Army in 1995. Throughout his adult years, he continued to be active with the E.E. Smith alumni association, serving on the board for his class and helping to raise money for scholarships. After the military, Gene worked at First Citizens Bank from which he retired in 2017. If you knew Gene, you were probably the target of one of his practical jokes. Always a prankster, Gene loved to laugh and delighted in the company of his family and close friends. But he didn’t just crack jokes. Gene could be counted on to provide wisdom and a shoulder to lean on. He was also a father figure to so many, especially, Deana Danzy and her daughter Malia Danzy, whom he loved dearly. He would advise all the young people to “do what you need to do now, so you can do what you want to do later.” His advice would often come with unforgettable sayings. He didn’t just say, “I don’t know” he would say, “I’ll tell you a lie, if you want me to!” He didn’t just say, “Goodnight,” it was “I’ll tell you like the farmer told the potato, Imma plant you now and dig you later.” Gene gave of himself to those he loved. You didn’t even have to say there was a need, he would just be there. Countless people can think of a time that Gene worked on their car, checked their tires, or fixed something in their home. He was the go-to person. Even in Costco, you would find this extrovert making friends with the other people in line. Nearly every morning, you would find Gene taking his 5-mile walk, saying “hi” and shooting the breeze with his neighbors. He didn’t have any enemies. Gene was a committed NASCAR fan. He loved racing cars and going to NASCAR races. Gene loved all-things car related. He even had a beloved Toyota Tundra that he refurbished and kept in great shape. Anything and everything he had was in pristine condition, especially his cars. Everyone knew that if you didn’t have your car in good shape, Unc Gene was gonna clown you. You knew not to show up with a dirty car. Gene never missed a family reunion or holiday gathering. You’d find him on the dance floor, swing dancing. “Me and Betty (sister-in-law) danced all night!” he would say the next day. It was important for him to stay connected to his extended family. It was why, in his retirement, he moved from Charlotte back to Fayetteville. His love for the military and family was only surpassed by his complete adoration of his only daughter, Latasha. These were two peas in a pod. Gene never stopped being her biggest cheerleader. He lived life with her. There was never a significant moment in her life that he wasn’t a part of. He was full of joy to see her live out her purpose. If you talked to Gene, you were going to hear him brag about Tasha’s many accomplishments, including making the Ebony 100 List in 2017. He traveled to Los Angeles to celebrate that moment with her. Thousands got to know and love Gene through Tasha’s book, Be the Bridge, which reached the New York Times Best Sellers list in 2020. He was a fierce supporter of the non-profit organization she founded, Be the Bridge, and a monthly donor. Gene Morrison is survived by his daughter, Latasha Morrison from Atlanta, GA, and bonus daughter Deana Danzy and granddaughter Malia Danzy; sisters, Sharon Brown (Warren Brown), Corliss Ketterer, and Beverly Williams and his Uncle Billy Ray, and host of nephews, nieces, extended family, and friends. He is preceded in death by his wife, Raecene S. Morrison (2011), his parents, Gladys Irene Morrison (2016), June Morrison (1991) and his brother Gerald Morrison who passed in 2005. Unc, Genie, Didy, Gene - whatever you called him - he left us an example of how to live our lives with dignity and honor, love and a joy for life. His presence will be greatly missed but his love, the memories and his sayings will live on in our hearts.)

Gene C. Morrison, 68, passed away on Thursday, January 21, 2021, in his hometown of Fayetteville, NC. He was a retired Master Sergeant (with honors) in the United States Army. He was a devoted father, brother, uncle and friend. Gene was the... View Obituary & Service Information

The family of Mr. Gene Clifton Morrison created this Life Tributes page to make it easy to share your memories.

Send flowers to the Morrison family.