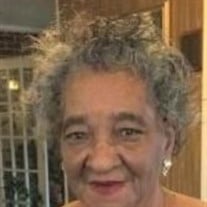 Glenda Ann Bellamy Buie daughter of the late Rev. James C. Bellamy, Sr., and Augusta Bellamy was born June 11, 1940 in Bladen County. Ann (as so many people called her) mother passed when she was only four years old, leaving her to be raised... View Obituary & Service Information

The family of Glenda Ann Buie created this Life Tributes page to make it easy to share your memories.

Send flowers to the Buie family.