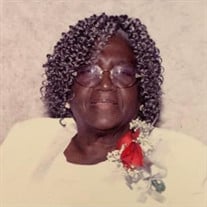 Hattie M. Lathan, 91, affectionately known as Mother Lathan of Maple Hill, North Carolina, passed away on Monday, March 15, 2021 at her home, surrounded by family. Apostle Lathan was born in Maple Hill, North Carolina on December 16, 1929. She was the fourth child of seven, born to the late Mr. and Mrs. John and Blanche Phillips. She is preceded in death by the love of her life, the late Bishop Jobe Lathan, her husband of 67 years. She is survived by: four children, Steven (Anita), Isaac (Deann), Alice and Thaddeus “Sid” (Shawna). She was the grandmother of 16 grandchildren, 20 great grandchildren, goddaughters, Ruthie Johnson, Rosa Jackson and Delores Robbins. Apostle Lathan attended school in Maple Hill, North Carolina and graduated from C. F. Pope High School as salutatorian. She later attended Shaw University in Raleigh, North Carolina. Her love of Christ began at an early age and as a servant of the Lord she has always been a faithful worker. In addition to serving God, she has always served her community and fought for human equality. She is known for her piety, humility, genuine love for people and volunteerism before and after she became a Pastor with her late husband Bishop Jobe Lathan. In the 1960’s, Apostle Lathan was on the front lines of the Civil Right Movement, participating in sit-ins. She became well known on Fort Stewart, Georgia because she integrated the Sunday school teaching staff there, leading to interview requests from Jet and Ebony magazines. She was baptized in the Holy Spirit in 1960 at St. John’s Missionary Baptist Church, beginning her lifetime of service to Jesus Christ. Her hard work and dedication in ministry were prominent throughout the 1970’s. While at Fort Bragg, North Carolina, she and her late husband joined Williams Chapel Freewill Baptist Church. Under the leadership of the late Pastor Robert Covington, she served as president of the Pastor’s Aid Committee, vice-president of the Mother Board, Sunday school teacher, president of the Missionary Board, and coordinator for the Prison Ministry. For the next 25 years, she labored in the vineyard by joining many Church auxiliaries, such as, Head Mother of The Mother Board, President of The Pastor’s Aide Committee, Missionary Board and as a Sunday school teacher. In 1982, Mother Lathan was named “Mother of the Year.” She was ordained under the leadership of the late Pastor John W. Peak, who greatly influenced her ministry. His guidance helped her develop in a threefold ministry: Love, Prayer, and Teachings. In 1985, she became an Associate Minister in the United American F.W.B. Conference. Her work ethic extended to the military, and at the Veterans Administration Building in Fayetteville, North Carolina, she taught Friday Night Bible classes to disabled veterans for ten years. Many miracles were observed, and many souls were saved, but she ensured that glory belonged to God. In 1986, Apostle Lathan and her late husband built a church in their community to provide prayer and reprieve in the midst of widespread drug use and gang violence. Through their outreach ministries, they compelled many in the community to attend church and serve the Lord. Bishop and Apostle Jobe and Hattie Lathan expanded True Vine’s enterprises. They established Nursing Homes Ministries, a food pantry, clothing closet, soup kitchen, meals on wheels, mentee-mentor, tutoring, and TV programs. Over 20 pastors, ministries and numerous ministers originated from their church. Other key community organizing events in the 1990’s included: delivering the invocation at a fundraiser for Senator Bob Dole; Executive Board membership for The Partnership for Children in Fayetteville, North Carolina and meeting with Governor James B. Hunt to discuss the needs of underprivileged children in their community. Mother Lathan was a role model that lived the life she boldly preached and taught. In December 2007, then Pastor Hattie Lathan was ordained Bishop. The spiritual energy she possessed was endless and allowed her to continue God’s work as Overseer of True Vine Temple Reasoning Center. She was a true mother indeed. In addition to rearing her own four children, she has adopted many other children, who were in need of guidance and unconditional love. Because of her love, care and humility, they all have grown up to be great men and women in Christ. Several ministries were birthed from her teaching: Testimony TV Ministry, Community Food Pantry Ministry, Meals on Wheels, Holy Ghost Headquarters, Mercy Seat Ministries, Mt. Moriah and many more. The love she radiated, the compassion she showed and the anointing that God has placed inside of her made her an example to all. When we think of the “Virtuous Woman,” in Proverbs 31, we know that woman to be Apostle Hattie M. Lathan. Apostle Lathan states, “My mission is to help people change and be delivered. God uses me to make disciples and preachers.” Apostle Lathan was recognized numerous times for her accomplishments. On July 14, 2020, she was conferred as Apostle and Doctor of Divinity. Throughout her lifetime she continued to make a difference in her community and church by being an example of God’s love for all people. A book has been written about her great work, called A Love Ministry, but she insists God gets all the Glory! John 13:34, “A new commandment I give unto you, That ye love one another; as I have loved you, that ye also love one another.”

The family of Ms. Hattie Lathan created this Life Tributes page to make it easy to share your memories.

Send flowers to the Lathan family.