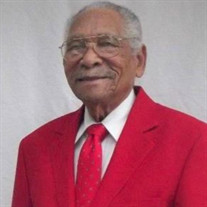 Rev. James E. (Jimmy) Jones was born to the late Wesley and Calisha Gerald Jones on December 5, 1927 in the Hilly Branch area of Robeson County. He went home to be with the Lord on July 10, 2021 at UNC Southeastern Medical Center, Lumberton, NC. The youngest of 10 children, James experienced hardship early in his life, having his mother pass away at the age of 13. Yet, he was able to graduate from primary school at the age of 16. After graduation, James moved to Baltimore, MD to live with his brothers where he found work at Bethlehem Steel Company. James served one day in the Army but was subsequently discharged because he was not yet of legal age to join. Although WWII ended in 1945, James was drafted into the Regular Army but opted to serve in the Army Air Corps from February 26, 1946 until February 25, 1949. James served with the Tuskegee Airmen under the command of General B. O. Davis, the first black officer to graduate from West Point Military Academy. The Tuskegee Airmen were a group of primarily African American military pilots and airmen who fought in World War II (Active 1940-1948). They formed the 332nd Expeditionary Operations Group and the 447th Bombardment Group of the US Army Air Corps (later designated US Army Air Forces). During his time in the military, he attended basic training at Sheppard Field Air Base, Wichita Falls, TX. He would then go on to attend airplane and engine mechanic general training on the B32 at Keesler Field, Biloxi, MS, followed by specialized training on the P47 at Chanute Field, Rantoul, Ill. Upon successful completion of advance training, he was assigned to Lockbourne Air Force Base, Columbus, OH. There he rose to the rank of Sergeant serving as a crew chief in the 100th fighter squadron single engine of the 302nd fighter group, working on the famed P47. His awards and decorations include Good Conduct Medal and WWII Victory Medal. Upon discharge from the service, James attended North Carolina A&T for a short time, where he studied industrial arts and also worked for the Pennsylvania Railroad as a boilermaker helper. In less than a year, James returned to Baltimore where he would start his life as an entrepreneur, after attending and graduating from Apex Barber School. (Records & Things) with two locations in Lumberton & St. Pauls, owner of a seafood fish market and restaurant, co-owner of several barbershops in Catonsville and Lumberton, founder/owner of JJ Insurance Agency, and founder/distributor of the Tri-County Record Newspaper. In addition to his entrepreneurial endeavors, James worked for Alamac Knitting Factory, served as a counselor for Youth Corps, and finally retired from Liberty Life Insurance in 1999. James served on numerous boards and community organizations, including, but not limited to: Robeson County Counseling Center, Lumber River Council of Government - Board of Directors, Center for Community Action, Lumberton Citizen Police Academy - Chairman, and Hilly Branch School Alumni and Lumber River Baptist Association and Lumberton Ministerial Alliance. He was also an Honorary Past Master of the Golden Leaf Masonic Lodge #124. Among his many professional accomplishments, James was most proud of earning his Red Coat symbolizing his service and contributions to the Tuskegee Airmen. He was awarded the Congressional Gold Medal, which is the highest civilian award presented by the U.S. Congress to an individual or group for an outstanding deed or act of service to the security, prosperity, and national interest of the United States. The medal was awarded to pilots, bombardiers, navigators, and mechanics of the Tuskegee Airmen, and other military or civilian men and women who supported ground duties. Awarded March 29, 2007, the medal recognized their “unique military record that inspired revolutionary reform in the Armed Forces. Preceding him in death were his parents: his wife, Ernestine H. Jones, his son, James Jones, nine siblings and three grandchildren: Te’Sean Dorsey, Ashley Williams, and Quantae Jones. James leaves to cherish his loving memories and legacy, his children: Evelyn C. Berry, Laurel, MD., Carlester Jones, Baltimore, MD., Cheryl Williams, Gwynn Oak, MD, Christine Jones-McCowan (Timothy),Bowie, MD, Darren (Karen) Dorsey, Knightdale, NC, Marcus Dorsey, Walnut Cove, NC, Charles (Toni) Jones, Phoenix, AZ, Courtney Jones, Princeton, NJ, Christopher Jones, Phoenix, AZ/ Lumberton, and Fonda Jones of the home, 25 grandchildren: (Torryn Jones and Kaitlyn Williams of the home), 19 great-grandchildren, and two great-great-grandchildren, two goddaughters, Rethea McCall, and Ernestine Forrest, father figure to Brandi Williams and Kisha London, six special friends: Wixie Stephens, J.W. Jacobs, Jimmy Adams, Rev. Thomas Jones, Rev. Jerome Billups, and Rev. Joseph M. Dunham and a host of nieces, nephews, family and many friends. Professional Service entrusted to Colvin Funeral Home, Lumberton, NC.

Rev. James E. (Jimmy) Jones was born to the late Wesley and Calisha Gerald Jones on December 5, 1927 in the Hilly Branch area of Robeson County. He went home to be with the Lord on July 10, 2021 at UNC Southeastern Medical Center, Lumberton,... View Obituary & Service Information

The family of Rev. James Elise Jones created this Life Tributes page to make it easy to share your memories.

Rev. James E. (Jimmy) Jones was born to the late Wesley and Calisha...