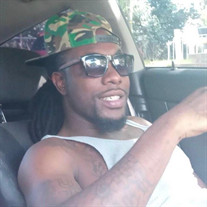 Jeroy Lamont Smith, age 30 of Fayetteville, North Carolina transitioned on March 14, 2021 at 12:32pm at UNC Chapel Hill Hospital. He was born May 27, 1990 in Fayetteville, North Carolina to parents, Frances Smith and Wilton Simmons. He was a student at Terry Sanford Sr. High School. His last place of employment was working at Kelly Springfield. When Jeroy was a toddler he spoke complete sentences and was very well spoken. He was born earlier than expected and came out on his own. His sister and brother, Rhonda and Barry, were told to celebrate his birthday an additional two weeks because he wanted it to be his birthday. He has been spoiled ever since, that was momma’s baby boy. He carried a blanket around and fooled everyone by sneaking out his playpen by kicking a hole at the bottom. He was called Linus from Charlie Brown as well. Jeroy always wanted to do business. At 5 years old he’d say, “we can put back together that bike and sell it”. He was always smart and liked to make money. He continued those ways into adulthood by being a great friend to friends and family. His mother said he would always do things to the extreme; his clothes, cologne, and having fun. His mother said he would do a little dance to show how cocky he was when he got himself dressed to go out. He would come by and check on those in need. The boys from the neighborhood grew up together and looked out for each other like brothers. Jeroy’s sister told their mother she was chased by a dog because of her dog starting it and he laughed and said, “I just wanna know how fast you were running Rhonda”. He would argue and do silly things and if you were mad at him it wouldn’t be for long. He would ask “are you still in your feelings?” And you couldn’t help but forgive for the things he would say to get you laughing. Jeroy had a silly laugh and would always say something silly. He loved his children, Breyonna, BreAsia, and Jeroy Jr. He loved his mother, sister, brother, family, friends and everyone that showed him love too. He leaves behind: his significant other, Tiffany Clarke; his children, Breyonna Davis-Smith, BreAsia Davis-Smith, and Jeroy Davis-Smith; his mother, Frances Smith: his father, Wilton Simmons; brother, Barry McKoy of Fayetteville, NC; sister, Rhonda Smith; nephew, Jeremiah Davis of San Diego, CA; his grandmother, grandfather, host of cousins, aunts, uncles, friends, and pet cat, Sable.

The family of Mr. Jeroy Lamont Smith created this Life Tributes page to make it easy to share your memories.