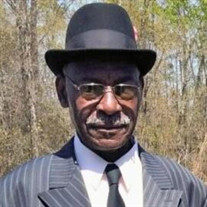 John David Rowdy, age 76 was born August 28, 1945 to the late James and Macie Rowdy. He was educated in the public schools of Robeson County. David (as most people called him) met and married the love of his life, the late Beulah Patterson... View Obituary & Service Information

The family of John David Rowdy created this Life Tributes page to make it easy to share your memories.

Send flowers to the Rowdy family.