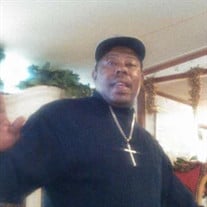 Kenneth “Kenny” McLaughlin was born to the late Lacy Carver and Mary McLaughlin on February 23, 1964, at Cape Fear Valley Medical Center in Fayetteville North Carolina. He was a devoted son, husband, father, brother, uncle, cousin and friend. On November 21, 2020, our Lord and Savior saw fit to call this angel home. Kenny attended Terry Sanford High School, where he played football, basketball, and baseball. After graduating in 1982, Kenny was employed by the City of Fayetteville. After retiring, he became a mentor and athletic coach at Myers Recreational Center to many youths throughout Fayetteville area. Coach Kenny, as he was most commonly known, loved each and every one of his players as if they were his own children. On January 13, 1998, Kenny joined in holy matrimony the love of his life, Sabrina DeBerry. Preceding Kenny in death are his parents, Lacy Carver and Mary McLaughlin; one brother, Larry McLaughlin; one sister, Vernella McLaughlin; mother-in-law, Betty D. Swint and father-in-law, Kenneth Walker. He leaves to cherish his memories: his loving wife of 22 years, Sabrina D McLaughlin; three daughters, Shabri, Kenijah and Javayah; four grandchildren, Hamourii, Zakera, Jaylah and Curley III; one godson, Henry Malik Johnson all of Fayetteville, North Carolina; one sister, Virginia Ann McLaughlin of Tennessee; three sisters-in-law, Cindy Johnson, Samantha Phelps both of Fayetteville, North Carolina and Qausheba Hardiman of Maryland; two aunts, Martha Wade of Grays Creek, North Carolina and Lydia Robinson of Lumberton, North Carolina; father-in-law, Willie Thompson of Pittsburgh; and a host of family and friends.

The family of Mr. Kenneth McLaughlin created this Life Tributes page to make it easy to share your memories.

Kenneth “Kenny” McLaughlin was born to the late Lacy
Carver and...

Send flowers to the McLaughlin family.