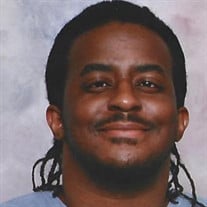 Kevin Bernard Slocumb, passed away peacefully on Tuesday May 11, 2021 at the age of 45. He was preceded in death by his father Howard Lee Slocumb Sr. Kevin is survived by his wife Khalilah Atkinson-Slocumb. He leaves behind six children, Jonathan M. Slocumb, Brendan M. Slocumb, Donovan B. Slocumb, Devin M. Slocumb, Khaliya C.Z. Slocumb and Karmen I. Slocumb, his mother Milo Reese Slocumb of Fayetteville NC, his brothers, Howard Lee Slocumb Jr. of Salt Lake City, Utah, Brendan Nicholaus Slocumb of Washington, D.C., his sister Dr. Robin Christee Slocumb (m. Troy Robertson) of Denver, Colorado and a number of aunts, uncles, cousins, and two nephews (Nathaniel Slocumb and Connor Robertson). Born, October 1, 1975 in Fayetteville, North Carolina to Howard L. Slocumb and Milo Reese Slocumb, he graduated from E.E. Smith High school where he served as Drum Major of the marching band and went on to receive a Bachelor of Science in Music Education from North Carolina Agricultural and Technical State University. During his time at the university, Kevin joined Kappa Kappa Psi, a music fraternity. He also served in the role of Drum Major to the Blue and Gold Marching Machine. After graduation, Kevin worked tirelessly as an elementary, middle and high school Band director, Choral director and general music instructor in Guilford, Robeson and Cumberland Counties respectively. Kevin was a devoted father, son, brother, uncle and teacher. He was an extraordinarily gifted musician, being proficient on both French Horn and Oboe. Throughout his life, he regularly shared his love of music by inspiring his students and performing with local musical groups. Kevin’s talent was indescribable. His creativity was evident in the arrangements of both classical and popular music he made. Kevin also loved sports, especially basketball. He was also heavily involved with his church family and loved the lord.

Kevin Bernard Slocumb, passed away peacefully on Tuesday May 11, 2021 at the age of 45. He was preceded in death by his father Howard Lee Slocumb Sr. Kevin is survived by his wife Khalilah Atkinson-Slocumb. He leaves behind six children, Jonathan... View Obituary & Service Information

The family of Mr Kevin Bernard Slocumb created this Life Tributes page to make it easy to share your memories.

Kevin Bernard Slocumb, passed away peacefully on Tuesday May...

Send flowers to the Slocumb family.