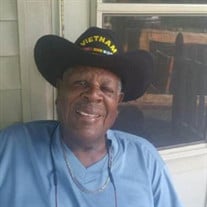 Luther Wilder Jr., passed away peacefully at the age of 94 on April 30, 2021 at Highsmith Rainey Speciality Hospital in Fayetteville, NC. He was born on April 16, 1927 in Five Point, AL to Luther Wilder Sr and Leila (Turner) Wilder. He enlisted in the United States Army in 1946 and served our country faithfully during World War II and the Korean and Vietnam Wars. He was honorably discharged and retired after serving 24 years and 8 months in the United States Army. After his military retirement he dedicated 10 years of selfless service to State of NC working as a USDA Inspector and retired again in 1983. His dedication to serve his community did not end there, he also diligently worked as an Auxiliary Coast Guard recruiter for many years, while also volunteering as a tour guide for the USO on Fort Bragg. In his later years he had the pleasure of serving on the Board of Directors for Pearce’s Mill Fire Department until his death. He was an avid outdoorsman, he enjoyed hunting, fishing and most of all spending time with his family and friends. Luther is survived by his wife Jacqueline B. Wilder of Fayetteville, NC, daughter Robin Wilder-Buchanan (Dwayne Buchanan), step-sons, Jerome (Frances) Godfrey, Jerry Godfrey of Fayetteville, NC, Michael (Kim) Godfrey of Glenn Dale MD, preceded in death is son Dennis Wilder (Jeanette Wilder) of Aberdeen, MD, Step-daughter Loretta Kimble of Fayetteville, NC, Step-sons Ricky Mack of Pembroke, NC, Theodore (Catherine) Mack and Antonia Rouse all of Fayetteville, NC. He was the grandfather to 26 grandchildren and 5 great-grandchildren. Luther was preceded in death by his brother Ruge Wilder of Cleveland, OH and Willie Maude Day of Warren, OH, his only serving sibling is Katie Davis of East Point GA Sister-in-law’s Imogene (Walter) Merchant and Bessie Blue all of Fairmont, NC, Brother-in-law’s Samuel (Velma)Blue of Hampton, VA and Sylvander O. Blue of Orangeburg, SC. We the family would like to give a special thanks to the nursing staff of Highsmith Rainey Speciality Hospital for the caring attitude they displayed everyday, their warmth and kindness soothe our breaking hearts. Although we grieve the loss of our Father, Father-in-law, Grandfather, Great Grandfather, Uncle, Cousin Friend and Husband, we have so many cherished thoughts and memories, and also have the grand hope from our Heavenly Father that we will see him again. Revelation 21:4, “And God shall wipe away every tear from their eyes, and death shall be no more, neither shall there be mourning , nor crying, nor pain anymore, for the former things have passed away. Psalms 34:18, “The LORD is close to the broken-hearted and saves those who are crushed in spirit.”

Luther Wilder Jr., passed away peacefully at the age of 94 on April 30, 2021 at Highsmith Rainey Speciality Hospital in Fayetteville, NC. He was born on April 16, 1927 in Five Point, AL to Luther Wilder Sr and Leila (Turner) Wilder. He enlisted... View Obituary & Service Information

The family of Mr Luther Wilder Jr. created this Life Tributes page to make it easy to share your memories.

Luther Wilder Jr., passed away peacefully at the age of 94 on...

Send flowers to the Wilder family.