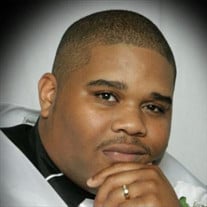 Lyell Thomas Alford was born November 9, 1989 in Fayetteville, NC to Lisa Edwards and Ronald McNair. In his early years, Lyell attended Morganton Road Elementary School. He moved up to Westover Middle School and graduated from Douglass Byrd High School where he helped manage the girls’ basketball team. Lyell was known to all his family and friends as Tommy or as some would call him, Tommy Gunz. Tommy enjoyed rapping, dancing, listening to music and playing video games. He was an active member of Bread of Life Equipping Center and served as Usher under the leadership of Michael Brinkley, Sr. He was outgoing, charismatic, full of joy and loved to bring smiles upon others. Some would say that Tommy was a bit of a jokester. His best friend, who is also his cousin, was Joseph Williams. Joseph and Tommy’s relationship resembled that of brothers rather than cousins. Lyell met his teenage sweetheart, Keyahna Rushing while attending Bread of Life Equipping Center at the tender age of 15. They both attended Douglass Byrd High School and lived their adult lives together. They enjoyed a beautiful courtship and were married on April 1, 2013 in Fayetteville, NC. He truly adored his wife and would often find subtle ways to let her know just how much he loved and adored her. Lyell was an extremely hard worker. He started working at Burger King at the age of 16 and worked as part of the management team. His hard work and dedication paid off and he was promoted to Assistant Manager. Lyell was loved by many but especially his siblings, Sarah Edwards whom he spent an enormous amount of time with, Zella McNair whom he inspired and Nikolas McNair whom he found delight in. They will all miss him dearly. Lyell was preceded in death by his maternal grandparents, Lyell and Barbara Stewart and his paternal grandmother, Pamela Covington. He leaves to morn his loving wife (of 8 years) Keyahna M. Alford; his mother, Lisa Edwards (Greg), his father, Ronald McNair (Bernadette); his paternal grandfather, Lenwood McNair (Theresa); two sisters, Zella McNair and Sarah Edwards; one brother, Nicholas McNair; five aunts, Denise Stewart, Diane Speights (Phillip), Susan Taylor (Michael), Cheryl McNair, Linda McNair (Aleta); one uncle, Donald McNair (Wanda) and a host of cousins, in-laws and friends.

The family of Mr. Lyell Thomas Alford created this Life Tributes page to make it easy to share your memories.

Send flowers to the Alford family.