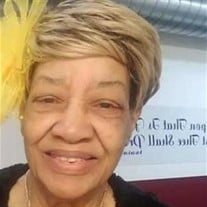 Queen Phyllis Storey Jones was born in Brooklyn, New York on July 11, 1938 to the late Joseph John Storey and Mildred Schermerhorn-Storey. Phyllis was the youngest girl of eight siblings. She was a loving mother, sister, auntie, grandmother, great grandmother, and yes great-great grandmother. She was educated in the New York City School System and always had a passion for nursing. She married Hugh Pongee Jones in 1956, and from that union came five beautiful daughters, Diane Tonya, Jennifer Marie, Kim Viola, Shyremia Phyllis and Talena Paula, who we were blessed to have in our lives for just a few months before God called her home. Diane Storey-Jones, Phyllis’s eldest daughter, preceded her in death, but gave her one of the greatest joys of her life her grandson/son, Damion MarkQue Jones, who raised her as her own. She always said Damion was the son she never had. Phyllis relocated to Queens, NY because she wanted a fresh start. However, she was proud of her background and never forgot her Brooklyn roots. Phyllis and her girls were in Brooklyn every weekend visiting her Mom, sisters, brother and their families. She loved to travel, she flew to Germany and Paris to visit her daughters while they were living overseas. Later, she would take the bus from New York to North Carolina to show her love for her family. When her granddaughter was in a pageant, she flew to California to be a part of the special moment. To her, family was everything. Phyllis was so caring, she loved her family. She was always helping someone in need. After raising her children, she opened her home to care for foster children. Phyllis had many roommates over the years, it was her nature to assist others and provide them with a place to live. Her kindness didn’t stop there, she also fed whoever was in her home at mealtime. Phyllis is predeceased by her parents John and Mildred, her husband Hugh Jones, her daughters Diane and Talena, her grandson Hashim Camps and her great grandson Zyneeq Quadir Camps-Ward. Also her seven siblings: Joseph John, Rudolph, Robert (Bobby), Arthur (Nookie) Tyrone (Roni) Catherine (Cappy) Dorothy (Dottie). Phyllis legacy continues to grow through her beloved daughters and their families: The late Diane Storey-Jones; grandson/son, Damion MarkQue Jones, Beloved daughter Jennifer Camps and Son in love Kevin Camps; grandchildren the late Hashim Camps, wife Sylvia Camps, Shaneequa Camps, husband Jerod Robinson; four great grand daughters: Tierra Camps, Ashaiah Camps-Robinson, Amia CampsRobinson and Amirah Camps-Robinson and one great grandson; Khalil Camps; two great great grandsons: Aamir Camps and Karter Camps-Dunn. Beloved daughter Kim V. Conyers, and Son in love James L. Conyers, granddaughter Jocelyn R. Ortega, husband Jesus Ortega, great grandchildren Caleb S. Ortega, Kendra J. Ortega, beloved granddaughter Kendra L. Conyers, beloved grandson James L. Conyers III, wife Lakeitra Conyers, beloved great granddaughter Isabella D. Conyers. Beloved Daughter Shyremia Latham and Son in love Jammy Latham of Queens New York. Grandson Demetrius Jones, Granddaughters Sharmaine Latham and Javonnia Latham; great grand children Jevon Latham, Kayleea Gibson, Jacquel Jones, JaylaSimone Jones, Camron Carter Jones. Her loving Sister in love Betty Storey, wife of the late Tyrone Storey; a host of nieces, nephews, and other relatives and friends. Phyllis will forever remain in our hearts. Though our hearts maybe heavy, our memories, and love for her will comfort us knowing she is well in the presence of our Lord

The family of Ms. Phyllis Jones created this Life Tributes page to make it easy to share your memories.