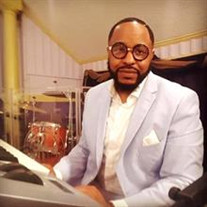 Our Beloved, William Earl Smith II graduated to his heavenly body on Sunday June 6, 2021. Born to William E. & Michelle B. Smith on August 30, 1982 Earl was the youngest and only brother to 3 sisters. He received his High School diploma in 2001 from South View High. Inspired by his Uncle Tyrone, Earl began learning how to play the drums at the very young age of 3 at Revival Center Church of God in Christ under the leadership of the Late Great Superintendent C.D. McNeill, where Earl used to sweat out his clothes mimicking the Late Reverend’s shouting and preaching styles. He found a permanent seat over in the musicians’ corner where he watched with intensity the incomparable Missionary Ruth Shephard as she would make the organ sing and lead the choir into high worship and shabach praise service after service year in and year out. Little did we know this would be the start of his predestined journey to become the Musician, Minister of Music, Minister, Praise Leader, and Prophet that we all grew to love, respect and care for. As a young teenager, Earl moved on with his family to attend Refreshing Springs Ministry C.O.G.I.C. where he continued to develop his musical skills. This is where he really began to gain an understanding of how to be a praise and worship leader under the direction of Helen Caesar. Knowing that he was anointed by God from his mother’s womb, William started to follow his calling for ministry. He developed strong relationships with and played for a plethora of music industry artists, Bishops, Pastors, Churches and groups worldwide. In 2015, he began his own Gospel group named “William Earl Smith & The Shabach Movement” showing his true talent as the praise and worship leader he had become. Earl’s ear for music is apparent when you listen to the over 100 original songs he has written and performed. He most recently released his first single “For The Rest of My Life” which is a testament to his unbreakable relationship with God! His reach was far and wide and most effective under the grooming and guidance of his spiritual mother, Apostle Carolyn Hicks who he had met early in his teenage years while singing with his spiritual sister, Angel, Southview High’s gospel choir. Earl had the ability to birth worship songs right on the spot in the midst of a high praise! He gave out of his soul each and every time he ministered, both from the pulpit and from the keys, and in doing so, many hearts were delivered and souls set free! His voice was anointed to usher in God’s Holy Spirit every time he sang! Not only did he touch people with his music, but Earl’s spirit and sense of humor gained him an extended family like none other! It is almost impossible to fathom how one person could develop close bonds with such a vast array of people and personalities! This truly speaks to his character and his humbleness. He loved people with the heart of God and welcomed them to do the same with others! Earl loved to help people, which was why he worked with group homes when he wasn’t ministering. Over the years he also enjoyed working as Night Auditor in the Hotel Industry, lastly employed with Tru by Hilton, Fayetteville I-95. William leaves to hold and cherish these lovely memories, his father and mother, 3 sisters; Sonya Smith of Hope Mills, NC, Linda Caesar (Mario) of Fayetteville, NC, and Zaneta Smith of Hope Mills, NC, 2 nephews; Larry Hannans III of Hope Mills, NC and Petty Officer 2nd Class Hezekiah Smith Naval Base of San Diego, CA; 3 nieces, Sonae Smith of Hope Mills, NC, Asia Hannans of Fayetteville, NC and Zariah McGrady Smith of Hope Mills, NC; 3 uncles, Robert Smith(Late Carolyn) and Tyrone Green of Fayetteville, NC , Michael Busch (Margaret) of Highpoint, NC; 1 Aunt, Diane Berry of Philadelphia, PA, an adopted Grandmother; Tholinda Franklin of Fayetteville, NC, and a host of Great Aunts and Great Uncles, cousins, extended family and friends! To say he will be missed is an understatement! Rest well son, brother and ‘Best’ friend!!

Our Beloved, William Earl Smith II graduated to his heavenly body on Sunday June 6, 2021. Born to William E. & Michelle B. Smith on August 30, 1982 Earl was the youngest and only brother to 3 sisters. He received his High School diploma in 2001... View Obituary & Service Information

The family of Prophet William Earl Smith II created this Life Tributes page to make it easy to share your memories.

Our Beloved, William Earl Smith II graduated to his heavenly...