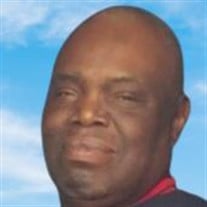 Mr. Reginald Dwight Markham, son of the late Reginald Markham and Hilda Virgil Markham was born July 27, 1960, in Chapel Hill, North Carolina. On Tuesday, November 30, 2021, God called him home to eternal rest. Reggie was educated in the Cumberland County Schools and was a member of the 1979 graduating class at Pine Forest High School in Fayetteville, North Carolina. Following high school, Reggie enlisted in the United States Army, where he served honorably for 12 years. During his military service, he was deployed and served in Desert Storm. Following his military career, Reggie worked in various jobs until he found his calling in truck driving. He drove long distance trucks, with Satchell Creek Express trucking company, until October 2021, when his health began to decline. Reggie was united in holy matrimony to Donna Sanders Markham and they were married for 11 years. He was preceded in death by his parents. He leaves to cherish his memories: his wife, Donna Markham; his brother, Michael (Ronda) Markham; his aunts Beatrice Thompson, Paulette Manning, Vivian Smith, Australia Virgil, and Franzetta Grandison; his uncle Vernell “Vernon” Virgil; his nieces SaKoyra, Mikisha, and Jasmine; his nephew Michael II; and a host of cousins, relatives, and friends.

The family of Mr. Reginald Dwight Markham created this Life Tributes page to make it easy to share your memories.

Send flowers to the Markham family.