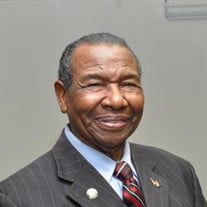 Dr. Robert Len Jones was born in Laurinburg, NC on January 22, 1935 to the late Willie (Bill) and Mamie Jones. He had three siblings (Willie Mae, Golden and John) who preceded him in death. He departed this life, after a brief illness, on February 28, 2021. Robert, known to his family as “Len”, highly valued education. He graduated from Chapel Hill School in Laurel Hill, NC. After graduating from Chapel Hill School, he enrolled in Winston-Salem State University. He left Winston-Salem State University briefly to serve in the United States Armed Forces. After two years in the Army, he returned to Winston Salem State University and completed his Bachelor of Arts in Education. He received several graduate certifications and degrees in education from North Carolina Central University and East Carolina University. He later attended NOVA University where he received a PhD in Educational Administration. Dr. Jones began his professional career at what is now W.H. Knuckles Elementary School where he taught fourth and fifth grades. During his over 40 years of service in the school system, he was a Teacher, Coach, Referee, Assistant Principal, Principal, Educational Consultant and Communities in Schools Administrator. As Principal of South Lumberton Elementary School, he received statewide recognition when the school became the first year-round school in Robeson County. He also taught adult education classes at Robeson Community College. He was a member of the Board of Directors for the Lumberton Boys and Girls Club for several years. Dr. Jones was a trailblazer who dedicated his career to offering the highest level of educational opportunities to students in Lumberton. In addition to his many achievements, he was a caring, compassionate teacher who served as an excellent role model for his students and touched many lives. He was often greeted warmly as he traveled around Robeson County and the surrounding area by former students who thanked him for “making them who they are today”. To know Dr. Jones was to love him. He was a “people” person who never met a stranger. His infectious smile and great sense of humor could lighten the most somber mood. He treated everyone in his presence to his special brand of hospitality, respect and kindness. Dr. Jones could rhetorically sit among kings and never lose the common touch. He was just as comfortable on his boat with his fishing gear as he was in a conference room filled with scholars. His signature response when asked how he was doing was “Super!”. As a civic-minded person, Dr. Jones was concerned about the welfare of those around him. He was committed to being a voice for the voiceless. He believed that “to whom much is given—much is required”. He sought elective office because he wanted to use his skills to benefit his community and champion the causes of the less fortunate. He was elected to the Lumberton City Council, representing Precinct 6, and served his constituents faithfully for 24 years. He received county and statewide recognition from numerous agencies for his commitment to public service. He was a Mason for many years. Dr. Jones accepted Jesus as his personal savior at an early age. After moving to Lumberton, he joined Sandy Grove Missionary Baptist Church, where he became a faithful and diligent member. He served in various positions and offices including Sunday School Teacher and Chairperson of the Deacon’s Ministry. He led various committees and men’s groups, and supported vacation bible school. He was also a committed member of the Lumber River Baptist Association, where he served as the president of the Laymen’s League for several years. In 1966, Dr. Jones married the love of his life, Joyce Parks and to that union two children---Rhondette Lenice Jones and Robert Len Jones Jr. (Bobby)—were born. This loving partnership was a blessing to all with whom they interacted. As a couple, they volunteered in the community and offered their time, talents, and resources to those in need. Dr. Jones deeply loved his family, his church, and his community. He enjoyed hunting, fishing and spending time with family and friends. He dedicated his life to public service and trying to make a difference in the lives of others. He was always willing to lend a helping hand, share an encouraging word and offer support when needed. He wanted to make a difference in the world, and he did just that, and for that reason, he will be missed Dr. Jones was a loving husband, father, grandfather, godfather, and uncle. He leaves to cherish his memories: his loving wife of 54 years, Joyce Jones; a daughter, Rhondette (Roderick) Nickson of Atlanta, GA; a son, Robert L. Jones, Jr. “Bobby” of Clinton MD; a grandson, Ryan Lucas Nickson of Atlanta, GA; his niece and namesake Linda (Luther) Douglas of Laurinburg, NC; his niece Lisa (Jermaine) Jones of Washington, DC; his nephew James Golden Jones “Jimmy” of Tucker, GA; his nephew William Emanuel Jones of Atlanta, GA; his goddaughters: Alexis and Chantel Body of Goldsboro, NC; Lachricia and Jordan Byrd of Lumberton NC; Melissa Robinson of Lumberton, NC, and a host of cousins, other relatives and friends. Professional Services entrusted to Colvin Funeral Home.

Dr. Robert Len Jones was born in Laurinburg, NC on January 22, 1935 to the late Willie (Bill) and Mamie Jones. He had three siblings (Willie Mae, Golden and John) who preceded him in death. He departed this life, after a brief illness, on February... View Obituary & Service Information

The family of Dr. Robert Len Jones created this Life Tributes page to make it easy to share your memories.