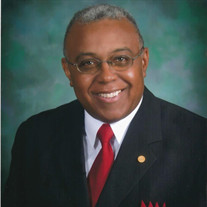 Robert Aaron Massey, Jr. was born on February 14, 1948 in High Point NC. As a child Robert was always known as a jokester and always kept his family full of laughter. There was a story where he used to sneak behind his brother Wilbur and take his ice water that he had that he purposely made before washing dishes so that once the dishes were complete, the water would be just right and ready for consumption. Robert did this on many occasions, so Wilbur decided to switch out the water for vinegar and Robert, being Robert, drank the vinegar, a chase ensued thereafter. Robert got the point and Wilbur was able to drink his ice water from that moment on in peace. Robert attended E.E. Smith High School in Fayetteville, NC and then became a golden bull alumni in 1966. He would then attend Fayetteville State University with a major in United States History and a minor in Political Science which he was awarded a Bachelor of Arts degree in 1970. Robert focused much on the issues that were being faced by African Americans at this time up until the end of his life. In 1971, Robert matriculated at the Catholic University of America in Washington D.C. where he completed his Master of Arts degree in Secondary Education in 1972. While doing student teaching at Fayetteville State University, Robert met Barbara Jean Harris from Henderson, NC and the two would soon marry and remained as such until her death on February 25, 1993. Robert would continue his quest for education as he did further study at NC A&T State University in Greensboro, NC, the University of North Carolina at Greensboro, NC and North Carolina State University in Raleigh NC. As a part of additional studies, Robert engaged in numerous projects that chronical the setting up of campaigns and running for public office in Fayetteville, NC. The focus on these projects were elements of campaigning without winning the race, in other words how do I get the people involved? How do I get them motivated? How do I get them to know that their voices matter, whether I win or not? As we all know, GOD has a fantastic sense of humor and on June 2, 1992, Robert was elected to serve the citizens of District #3 in the City of Fayetteville, NC. Robert served in this capacity for 24 years and even served as Mayor Pro Temp at one particular point. His accomplishments while serving as city council include: a revitalized downtown; improved drinking water in western Fayetteville; Hope VI (a revitalization project); Bronco Square Shopping Center; transit expansion; the city’s official song; recycling and the Airborne & Special Operations Museum. His only regret according to Robert was “The turnout for municipal elections has always been low, often below 25%” Robert was all about getting us all out to vote, no matter what. He would get off the phone with his children this past election and after they would say I love you daddy, He’d say “I love you too, but did you vote?” While serving on the city council, Robert also worked at Fayetteville Technical Community College as the Director of the High School Diploma program which he had daily stories about the job and the many successes that he witnessed and actually had a hand in. People have given reports to the family that he helped them in this capacity and even got them on track to further their own education outside of having a high school diploma. Robert retired from FTCC in 2002 and with the City Council in 2014. After these retirements, Robert became more involved with his church and his family. He was an active Elder with College Heights Presbyterian Church, sang in the church choir and served on several committees for the Presbytery of Coastal Carolina. Robert was a member of the National Association for the Advancement of Colored People, The Black Presbyterian Caucus, Alpha Phi Alpha Fraternity and a charter member of Sigma Pi Phi Fraternity of Cumberland County. Robert was not one-dimensional at all; he was not only cheerful company when entertaining family and friends but was also a great teacher, wonderful parent that often taught us lessons without us knowing that the lesson was even being taught. He was blessed with the talent to use his energy astutely and effectively, thus achieving many things in his long life on a broad front. Robert used his close relationships to express his life and dreams. He leaves behind his three children, Stacey Monique of Greensboro, NC, Robert Aaron, III of Fayetteville, NC and Christopher Alexander of Fayetteville, NC. Also, a grandson, Robert Aaron, IV who is currently in Laurel, Maryland who is currently age 14. He also leaves behind his siblings, Barbara Lee Massey of Pickens, South Carolina, Wilbur Alexander Massey of High Point, NC and Avys Laverne Massey also of High Point, NC. He also leaves behind a niece, Ms. Courtney Massey of Charlotte, NC as well as an abundance of cousins, additional family members and friends. Robert Massey ,Jr. left us a rich and brilliantly lit path and example. He took hold of life and shared his journey with us all. Thank you, sir. Job well done. You will forever be loved and will forever hold a piece of our hearts. Robert Massey, Jr. transitioned on February 5, 2021.

Robert Aaron Massey, Jr. was born on February 14, 1948 in High Point NC. As a child Robert was always known as a jokester and always kept his family full of laughter. There was a story where he used to sneak behind his brother Wilbur and take... View Obituary & Service Information

The family of Mr. Robert Aaron Massey Jr. created this Life Tributes page to make it easy to share your memories.

Send flowers to the Massey family.