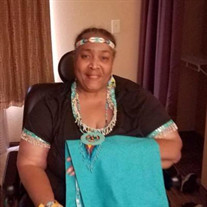 “Tammy Elizabeth Basnight-Hicks, 60, of Fayetteville NC, passed away January 15, 2022 with her family by her side.” “She was born to parents Burnice Hicks and Shirley Brothers, February 16, 1961, in Baltimore, Maryland. Tammy graduated from Maxwell High School and received a nursing degree.She leaves to mourn her siblings Venus Rhabb, Burnes Hicks, Jr., Urana Hicks, Terris Hicks, Montega Hicks, Kiyanika Hicks, Ryan Davis and Joseph Hicks. Tammy married Francisco Basnight Senior in 1984, and they lived in Brooklyn, Queens and Long Island for twenty-two years before moving to Fayetteville, NC. Tammy is survived by four children Fransciso Basight Jr., Kwan- Sai Basnight, Don Hobson and Edwin Hobson. She is also survived by five grandchildren Tiffany Hobson, Donte Hobson, Jada Hobson, Kwan-Sai Jr. and Kyle hobbson. The simplest pleasures in life, such as traveling to be with family and friends, going to pow wows, and making Native American jewelry. Tammy was a chief ( First Rose) for Under One Nation Tribe and touched many lives by her kindness and desire to help others. Tammy was different; her sense of humor was all over the place, If you know her ya know her. She always had to have multiple of everything. She never let too much of anything get to her. Because she would say life is too short you have to enjoy it all while you can. She was a jack of all trades. I mean there wasn't anything she couldn't do. From gardening, being a chief, an advisor to others, business owner, a friend, being creative and crafty I could go on and on. She was funny and really enjoyed life. She would go to the tracks where she would watch her brothers race and she and her sisters would all get together and have sisters day. Tammy was immensely proud of her family, and leaves behind nothing but beautiful joy and memories

The family of Mrs. Tammy E Basnight created this Life Tributes page to make it easy to share your memories.

Send flowers to the Basnight family.