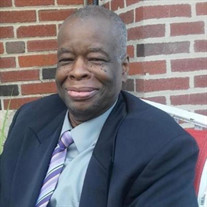 Mr. Theodore Elsworth Watts gained his angel wings on November 29th, 2021 at his home in Fayetteville, North Carolina. Theodore (Theo) was 80 years old. Theo’s final days were spent with his beloved wife, Sandra, by his side. In addition, he was surrounded by family and friends who Theo had touched in some small way throughout his very memorable life. Theo was born on March 27th, 1941 in Norfolk, Virginia, to Sarah Walker Watts and Roy Watts Sr. Theo grew up in Norfolk where he attended John Goode Elementary and Ruffner Junior High school. He lived in the South in his early years. As a young adult, he delivered groceries on his bicycle for Dykes market and he also worked at Pinewood Gardens apartments. Theo and his siblings would attend church at the New Calvary Baptist church. At the age of 18 years old, he made the decision to move to the big city of New York. In New York, Theo worked for most of his life as a Laborer and as a Security Guard. He later met and marry his beautiful and caring wife. Theo was a very calm man, and he always displayed a gently smile. He held fast to his beliefs, defending and taking care of those he loved. Anyone who truly knew him, knew he had such a big heart. Theo would always make you feel welcomed in his home. He loved to cook, he always enjoyed a good joke, he liked growing plants and fixing things around the house. In addition, he enjoyed watching football, basketball and playing games with his friends and family. After living in Brooklyn, New York for over 60 years, just six months ago, Theo and his wife relocated to their retirement home in Fayetteville, North Carolina. He enjoyed living in North Carolina, and he was very happy with the house that him and his wife had purchased. It truly is sad that Theo will not be able to share his gifts and enjoy life with the world any longer. Theo is survived by his wife, Gwendolyn Steele-Watts (Sandra); brothers: Leon Watts, Roy Watts Jr; sisters: Shirley Jones and Vanessa Whitehurst. Aunt Ruth Walker Askew, several nephews, nieces, cousins and special friends in Brooklyn, New York. He loved fiercely and deeply, so we take comfort in knowing that Theodore Elsworth Watts is now at peace with the Lord his creator, and that he is surrounded by Angels and lights.

Mr. Theodore Elsworth Watts gained his angel wings on November 29th, 2021 at his home in Fayetteville, North Carolina. Theodore (Theo) was 80 years old. Theo&#8217;s final days were spent with his beloved wife, Sandra, by his side. In addition,... View Obituary & Service Information

The family of Mr. Theodore Watts created this Life Tributes page to make it easy to share your memories.

Send flowers to the Watts family.