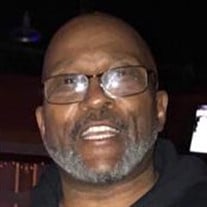 Wallace “T-Bear” Mason was born in Washington, DC on October 26, 1955, to the late William A. Mason and the late Yvonne S. Mason. Affectionately called “Wally,” he was the third of their five children. He was raised in the Catholic faith, which served as a foundation for his uniquely spiritual life nurtured in biblical teachings and service to others. Later in his life, he became a member of The Church of Christ. Independent from a young age, while living in Germany, Wally wandered off from his mother only to be discovered at a movie theater by himself, enjoying a movie and popcorn, oblivious to the concern he had caused. Wallace attended Archbishop Carroll and Theodore Roosevelt High Schools. A standout athlete, he was awarded a full scholarship to North Carolina Agricultural and Technical State University. Wallace’s academic path was met with a detour when he followed in his father’s footsteps and enlisted in the United States Army. Over the course of three years, Wallace served as a White House Honor Guard and guard at the Tomb of the Unknown Soldier. Honorably discharged from the Army, Wallace attended Howard University, where he distinguished himself in several areas, such as the Howard football team where he played tight end “number 82” and became a member of the XI Chapter of Kappa Alpha Psi fraternity. He then received a degree in Computer Information Systems. It was at Howard University that Wallace earned the nickname “The Bear” or “T-Bear”- an endearment he was known by for the rest of his life. After graduating from Howard University, Wallace was recruited by Aerospace Corporation in El Segundo, California where he worked for most of his career. To enhance his IT education and training, he returned to school, graduating from California State University in 1986 with a master’s degree in Computer Information Systems. After many years in the IT space, Wallace pursued his passion for working with youth, teaching for the Inglewood Unified School District in Inglewood, California, before retiring in 2015. His students still remember him by his famous quotes “Don’t Talk” and “You Don’t Hear Me Though”. Wallace was a man who valued family first and foremost! The heart of his family came from his marriage to fellow Howard University graduate and life-long love, Alva Adams. The couple was married on the campus of Howard University’s Law School on November 6, 1987. Through this union, Wallace received his most cherished blessing and gift: his three daughters Ashley (Mohammed Williams), Ella (Cameron Cecil), and Bailey. Wallace adored his family and they celebrated life together in so many ways. As a faithful father, he made it a priority to always make himself available for all family activities, vacations, games, and special events. He further lived out his commitments to the family when he took in and helped raise Alva’s younger siblings, Quinton and Shewanna Adams. Wallace had a large group of people he called family and proudly forged a bond between his brothers, Mark, Alvin (deceased), Theodore (deceased), Don and his siblings by marriage, Quinton, Shewanna, Wendy (deceased), Yvonne, Karen, Antoi-nette, and Betty. Wallace, hands down was the favorite uncle. Uncle Wally’s animated tone and sense of humor entertained his nieces and nephews: Belinda, Patricia, Mark II, Janine, Risha, Jaime, Don II, Nicole, Christopher, Jonathan, Jerry, Camille, Nyah, Brenden, and Lil Quint. His arms were wide enough to embrace grand nieces and nephews: Marcus, Brittany, Briana, Jamilah, Mark III, Isaiah, Kierra, and Nina. Following his retirement, Wal-lace devoted himself to help care for his treasured grandsons Cameron and Cayden while their parents serve as active-duty officers in the United States Army. Other dear family members include his stepmother, Helen, his Aunt Esther, his cousins, Carolyn, Veronica, Jeanette, and Angela, other aunts, uncles and cousins too numerous to name but all truly special. Wallace was known for his compassion and loyalty which he shared generously with those who crossed his path. Family also included his line brothers on the 14Karat Gold, particularly “Dolla” Bill Woodard, whom he spoke with every day, as well as, a host of friends that he loved dearly. Wallace’s passions were many: sports (particularly football and cheering on the Washington Redskins), playing dominoes, card games, his immaculate Lincoln Continental, and cooking. His culinary specialties included his renowned pound cakes and chocolate chip cookies. Wallace Mason was a generous man and one of his greatest contributions was the time he spent with family and friends.

The family of Mr. Wallace Hiram Mason created this Life Tributes page to make it easy to share your memories.

Wallace “T-Bear” Mason was born in Washington, DC on October...

Send flowers to the Mason family.