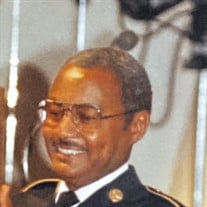 Obituary Sergeant Major (RET) Walter Cole, age 77, of Fayetteville, NC was called home to be with the Lord on Wednesday, July 14, 2021. He was born in Four Oaks, NC on November 25, 1943. Preceding him in death were his parents, George Cole and Callie Cole, three sisters, Gertrude Williams, Nadine Jackson, Nellie Green and two brothers, Leroy Cole and Eugene Cole. Walter graduated from Forest Hill High School in Four Oaks, NC in 1962. Following his graduation from high school, he entered the United States Army, in which he served honorably for 29 years, achieving the rank of Sergeant Major (E9). He is a proud veteran of the Vietnam War, where he served faithfully for one tour of duty. He also served foreign duty assignments in Germany, Panama Canal Zone and South Korea. Since Walter’s military career field was aviation, once back in the United States, he was selected for the prestigious assignment of Senior Helicopter Mechanics Technician based at Fort Belvoir, VA. In this position, he was responsible for the readiness of the helicopter fleet that transports high ranking dignitaries and other government officials. Following this assignment, he was selected to serve as the Senior Enlisted Career Advisor for the Army’s enlisted aviators worldwide from the Army Human Resources branch based at the Pentagon in Arlington, VA. During his enlistment, he received numerous awards and decorations which included the Legion of Merit and Bronze Star. Walter’s Army career played a very important role in his life. The discipline and patriotism he learned in the Army never left him, as his family and friends will attest. Upon retiring from the Army in July of 1992, he relocated to Fayetteville, NC to be closer to his family. Once settled, he pursued a career as Supervisor of Custodial Services for the Cumberland County School system. Additionally, Walter became a very loyal and dedicated Life Member of VFW Post 6018. Walter loved fishing, yard work, and gardening. He found sanctuary in long fishing trips, as well as riding his motorized lawn mower and tending to his yard and vegetable garden. He also loved and enjoyed cooking some good ole soul food and grilling that finger licking chicken and ribs. Surprisingly, Walter was one to really enjoy some smooth, foot stomping Old School sounds and live entertainment. He will be profoundly missed by everyone who knew him. He leaves to cherish his memory his devoted wife of 45 years, Sandra Cole, Fayetteville, NC, and a stepson, Kent McLaurin, Alexandria, VA. He is also survived by an adoring sister, Dorothy Cole, Greensboro, NC, and two loving brothers, Charles Cole (Lucy), Fayetteville, NC, and George Cole, Jr. Neptune, NJ, in addition to a host of nieces, nephews, and friends.

Obituary Sergeant Major (RET) Walter Cole, age 77, of Fayetteville, NC was called home to be with the Lord on Wednesday, July 14, 2021. He was born in Four Oaks, NC on November 25, 1943. Preceding him in death were his parents, George Cole... View Obituary & Service Information

The family of Walter Cole created this Life Tributes page to make it easy to share your memories.

Send flowers to the Cole family.