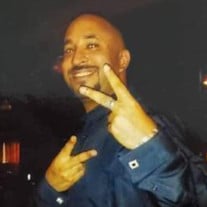 On December 18, 2020 our dear son, nephew, cousin and friend, Willie “Bill” Crumpler, Jr. departed this earth for his heavenly home. Bill was born on March 7, 1982 in Detroit, MI to Willie D. Crumpler, Sr. and Alice Sharp Crumpler. As an only child; Bill was doted on endlessly and adored by his parents. Bill was an energetic, creative and bright child who excelled academically and socially. Bill’s talents were lovingly nurtured by his parents as he engaged in many recreational activities including karate; earning a brown belt status. Bill’s personality and the depth of his character were wide ranging. He could engage in philosophical and thought provoking discussions about socio-political issues or play the hyperactive jokester to everyone’s annoyance. As “Fleetwood”, Bill could set it off with gritty lyrics in a rap battle or sit quietly pouring over his beloved comic books. Bill graduated from Pershing High School in Detroit, MI with honors and was awarded the Helen Thomas Inaugural Scholarship, Rosa Parks Scholarship Foundation Award and a journalism grant from the Detroit Free Press. Bill attended Wayne State University in Detroit, MI where he matriculated in the journalism program. Music and writing were strong passions that he enjoyed and enthusiastically shared with others. Bill was a free lance writer and became a published author in 2008 with The Killing Hand, a murder mystery set in Bill’s beloved hometown of Detroit. In 2015, Bill moved to NC with his parents to be in closer proximity to his paternal family. While he acclimated to this change and enjoyed being nearer to family; his heart remained with his birth home of Detroit. Bill is survived by his parents, Willie D. Crumpler, Sr. and Alice Sharp Crumpler of Autryville, NC; maternal aunts, Billie Swisher and Gloria Jones of Fort Worth, TX; paternal aunts, Issie Carter and Alma Johnson of Fayetteville, NC and paternal uncle, Elwood Johnson of Fayetteville, NC; great aunt, Louise Avery of Turnbull, NC as well as a host of cousins both on his maternal side in Texas and his paternal side in North Carolina and a wealth of friends in Detroit, MI. Special thanks and recognition to Bill’s childhood and lifelong friends who he recognized and loved as his brothers; James M. “Boo” Broadnax, Jr., Ricardo “Rico” Kendrick, Kevin Rushing, Javarre “Vedo” Lee, David Nealy and Arthur Clemons, III all of Detroit, MI. Thank you so much for giving Bill sibling-like love, camaraderie and loyalty!

The family of Mr. Willie D Crumpler Jr. created this Life Tributes page to make it easy to share your memories.

Send flowers to the Crumpler family.