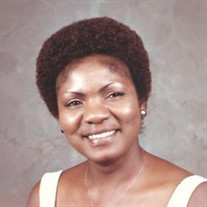 Wilma Grace Lett Garner was born in Hoke County, North Carolina on June 21, 1945. She departed this life Friday, November 27, 2020 at Cape Fear Valley Hospital in Fayetteville, North Carolina. She was the sixth child of the late Herbert C. Lett and Daisy Ree Lett. At an early age, Wilma joined the Second Missionary Baptist Church which services as the family church for the Lett and Garner family. In 1965 she married Wilbert Gary Garner Jr. Through this union Wilma would have her one and only child. She was a mother of strength, love and fortitude. Giving everything of herself to ensure her family was well cared for. Wilma was woman of educational virtue, receiving her high school diploma from E. E. Smith Sr. High School, (Class of 63), a Cosmetology license from Fayetteville Beauty College and a certification in Data Entry in 1970. She would later receive her Bachelor of Arts degree in Business Administration from Shaw University in 1991. That year the Garner family celebrated two graduations, (Gary G. Garner, E. E. Smith c/o 91). After 35 years as a Purchasing Agent, she retired from the Department of Veterans Affairs in 2004. Following her career as a federal civil servant, Wilma would move to the classroom teaching math at Fayetteville Technical Community College and Northwood Temple Academy until 2007. Gracey, as some loving called her, was an affectionate caring person and friend, always thinking of others first, looking to see the best in a everyone, “To know her was to love her.” She enjoyed listening to music, staying up late nights watching her favorite television shows, cooking, horticulture, fashion and most of all shopping. Thrift store owners did not stand a chance when she walked through the door. But, above all Wilma loved spending time with her beloved family and close friends. Her sense of humor, charm, smile and laughter brighten any moment. Wilma “Gracey” Garner was loved by many and will be deeply missed by all who knew her. Wilma is preceded in death by siblings Samuel McGill, Bernice Lett, John A. Lett, Curtis Lett and Annie Thornton. She leaves to cherish her precious memories son, Gary Gerard Garner (Shanette) of Fayetteville, North Carolina; two sisters, Dr. Maxine Arnette (Duncan) Fayetteville, North Carolina and Paula K. Lett of Raleigh, North Carolina; grandchild, Darien E. Logan; her lifer partner of 23 yrs., John T. Hart, a host of nieces, nephews, cousins, adopted sons and daughters.

The family of Ms. Wilma Garner created this Life Tributes page to make it easy to share your memories.

Send flowers to the Garner family.