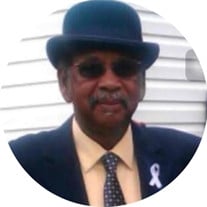 Ambrose L. Lucas, Jr. of Fayetteville, N.C. was the son of the late Ambrose L. Lucas, Sr. and the late Pauline Artis Lucas of Spring Lake, N.C. He was preceded in death by his sister Beatrice A. Farmer and bother-in-law Arthur J. Farmer. Ambrose’s early years were spent in Spring Lake in a loving community which included many family members spanning several generations. One may call this type of community a village for it is often said “it takes a village to raise a child”. This village took that adage seriously for friends and family did not hesitate to report to your parents whenever you appeared to be out of line. Ambrose ultimately came to realize that those were the “best of years”. Having professed faith in God at an early age, he was welcomed into the fellowship of Bethel A.M.E. Zion Church where he was a faithful member until his health began to decline. Over the years, Ambrose served as Superintendent of Sunday School, Class Leader, member of the Steward Board and the Male Chorus. As Class Leader, He often made calls to the youth to encourage them. Ambrose was a graduate of Anne Chesnutt High School, Class of 1960. Special activities he enjoyed included the Drivers’ Club and the Drill Team. Through these activities Ambrose developed lifelong friendships. Although he was admitted to Fayetteville State University, he decided to leave school to begin his work experience. He was a faithful employee at the Fort Bragg School System ensuring the facilities were always in good condition for the children and staff. Upon his retirement he became an entrepreneur starting his own business, Lucas Cleaning Service. Family was very important to Ambrose and he continued a special bond with his parents throughout his life and always remembered the mandate from his Mother; “be kind to your brother and sisters”. From his prior marriages, he always felt blessed to have his wonderful children, grandchildren and great grandchildren who were his ultimate joy. He was preceded in death by his brother-in-law, Arthur J. Farmer, Jr. Surviving to honor and cherish his memory are: daughters, Pamela Lucas McCray (Kevin) of Fayetteville, NC, Tara Lynn Matthews (James) of Sanford, NC and Anna Maria Marquez-Lopez Smith (Kenneth) of Sanford, NC; sons, Pierre LaMar Lucas of Houston, Texas, Mackie Marquez-Lopez of Hollywood, FL and Luis MarquezLopez (Diana) of Fayetteville, NC; brother, Jerry M. Lucas of Spring Lake, NC; sisters, Muriel Allen of Spring Lake, NC, Evelyn Smalls of Berwyn, PA and Tressie Staten of Spring Lake, NC; 22 grandchildren; 22 great-grandchildren; one aunt, Ernestine Nichols; one uncle, William Lucas Sr. both of Spring Lake, NC; and a host of nieces, nephews, cousins and friends.

Ambrose L. Lucas, Jr. of Fayetteville, N.C. was the son of the late Ambrose L. Lucas, Sr. and the late Pauline Artis Lucas of Spring Lake, N.C. He was preceded in death by his sister Beatrice A. Farmer and bother-in-law Arthur J. Farmer. Ambrose&#8217;s... View Obituary & Service Information

The family of Mr. Ambrose Lafayette Lucas Jr. created this Life Tributes page to make it easy to share your memories.

Send flowers to the Lucas family.