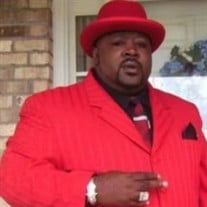 On Sunday, May 16, 2021, God saw fit to call home His child, Clarence Lamb (General). He was born on May 2, 1970 in Brooklyn, NY to Mr. Clarence Overton and Mrs. Margaret Paul. Clarence was an inspiring, funny and loveable young man. To have known him was to love him. He was known as the glue to his family that held everything together. He was a great encourager and was known to dress to impress. He had a laugh out of this world that was contagious. His eagerness to own his own business has become an inspiration for all those who loved him. He graduated from South Shore High School in Brooklyn, NY and later continued his education at Carolina Bible College in Fayetteville, NC where he received his Bachelor’s Degree in Biblical Studies. He was a man of faith and a student of the God’s Word. He was proceeded in death by his grandmother: Dorothy Mae Frayr; his step-father: Roland Paul; his uncles: Ambrose Roberts, Sr., Henry Lamb, Edward Wadesworth; his aunts: Mary Rich, Patricia Lamb; his cousin: Ambrose Roberts, Jr. Memories will remain in the hearts of his loving wife, Carlise Lamb of Spring Lake, NC; his children: Clareyce Lamb, Shytiana Lamb, Shatia Lamb of Brooklyn, NY; Clarence Lamb Jr., of Warsaw, NC; Eric Cherry of Cameron, NC; Zavion Lamb, Zahari Zellner of Fayetteville, NC; his bonus children: Bryona Porter, Imani Chandler, I’Dayah Chandler of Fayetteville, NC; his grandchildren: Samiyah Brown, Mekhi Foster, Carter Lamb, Ka’Ouir Lamb; his bonus grandchildren: Cayden Bradshaw, Amaya Porter, Braylon Newsome; his devoted parents, Margaret Paul of Fayetteville, NC and Clarence Overton of Alabama; his aunts: Annie Garner and Carrie Brinson of Clinton, NC; Noona Roberts of Brooklyn, NY; his uncle: Preston Lamb of Newark, NJ; his siblings: Charlie Lamb of Shirley, NY; John Paul of New York, NY; Danny Paul, Justin Paul, Margret Paul, Jalayiah Paul and Aalissia Paul of Fayetteville, NC; Melanie Paul of Queens, NY; Latia Paul of Marietta, GA; Coronda Shannon and Artavia Lineszy of Durham, NC; Shamecca (Richard) Gray of Manhattan, NY; William Corbett of Rosehill, NC; Lorraine (Siwatu) Jackson of Goldsboro, NC; Victor Morris of Queens, NY; his best friend: Marlin Merritt of Raleigh, NC; cousins, mother-in-law, nephews, nieces, and a host of other relatives and friends. Clarence Lamb will truly be remembered and missed by his family and friends.

On Sunday, May 16, 2021, God saw fit to call home His child, Clarence Lamb (General). He was born on May 2, 1970 in Brooklyn, NY to Mr. Clarence Overton and Mrs. Margaret Paul. Clarence was an inspiring, funny and loveable young man. To have... View Obituary & Service Information

The family of Mr Clarence Lamb created this Life Tributes page to make it easy to share your memories.

Send flowers to the Lamb family.