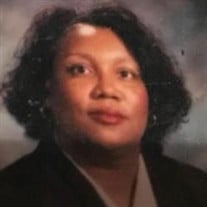 Cynthia Gail McDowell Smith began her earthly journey on December 2, 1958, the daughter of Katie McDowell Copeland. Her mother held fast to the bible’s teachings to “train up a child in the way he should go” which resulted in Cynthia’s early affiliation with First Baptist Church under the leadership of Dr. E. B Turner. Her spiritual journey would transition her to obtain membership at Cromartie’s Temple of Praise under the discipleship of Elder George Cromartie. Upon her relocation to Raleigh, NC Cynthia attended Wake Chapel Church. At an early age, Cynthia’s intellectual abilities became apparent while attending South Lumberton Elementary School (W.H. Knuckles) where she was an avid reader and quickly absorbed information. Cynthia was a member of the class of 1977 at Lumberton Senior High School and matriculated to the University of North Carolina at Pembroke graduating in1981 with a Bachelor of Science in education. While attending UNCP, Cynthia met her future husband and life partner Saul Alphonzo Smith III (Zack). According to Zack, he and Cynthia were introduced by a mutual friend and there was an instant attraction which included making him laugh. Although it was his senior year, he knew there was something special about Cynthia particularly her intellect which she also admired in him having seen his name on the Dean’s List. Zack says that their relationship blossomed when they realized they shared the same life goals which included obtaining their college degrees, establishing careers, buying a home, having a family, assuring that their children graduated from college, retiring and traveling. Zack and Cynthia celebrated 38 years of marriage. Upon receiving her teaching licensure, she began her thirty-year educational career with the Public Schools of Robeson County eventually transitioning to the Wake County Public Schools as a math teacher. She was an outstanding educator and mentor as evidenced by her being named Teacher of the Year while at East Wake Middle School. Her professional affiliations included membership in the North Carolina Association of Educator (NCAE). Having superbly fulfilled her calling as a classroom teacher inspiring critical thinkers, Cynthia retired in 2012 after successfully enriching the lives of her students and colleagues. Her thirst for knowledge continued during her retirement as she traveled extensively absorbing the culture and lifestyles of South Africa, Paris, France, Switzerland, Germany and several states. Her post-employment period also afforded her the opportunity to spend quality time with her grandchildren. In the early dawn of Thursday, June 17, 2021 God called his warrior home, fulfilling her earthly journey. Cynthia finished her course having maintained her faith through all of life’s circumstances and now rests peacefully in the arms of her Savior and Redeemer. Cynthia was pre-deceased by her father Leroy Copeland, Jr., nephew Jerrell Flowers and her in-laws Saul Alphonzo (Mary Esther) Smith II. In addition to her husband, Saul Alphonzo Smith III and her mother, Katie McDowell Copeland, others left to cherish her memory and carry on her legacy include her children: Kristen (Derrick) Kemp, Brandon Smith and Damian Smith all of Raleigh, NC. Her legacy and love of life continues through her grandchildren Derren Kemp and Kaylin Kemp, Raleigh, NC, sisters: LaRosa McDowell of Lumberton, NC, Sylvia (Bobby) Scales of Fort Dodge, Iowa and her brother Gregory McDowell of Lumberton, N.C. thirty-five nieces and nephews, seven sisters-in-law and one brother in-law. Special friends: Laureen Bines of Durham, N.C. and Thydora Wilson of Raleigh, NC. Her aunt Mary McDowell and uncle Cleveland McDowell of Lumberton NC. “Well done, thou good and faithful servant; thou hast been faithful over . a few things, I will make thee ruler over many things: enter thou into the joy of thy Lord.” . Matthew 25:2 Professional Services entrusted to - Colvin Funeral Home, Lumberton, NC.

Cynthia Gail McDowell Smith began her earthly journey on December 2, 1958, the daughter of Katie McDowell Copeland. Her mother held fast to the bible&#8217;s teachings to &#8220;train up a child in the way he should go&#8221; which resulted... View Obituary & Service Information

The family of Mrs. Cynthia Smith created this Life Tributes page to make it easy to share your memories.