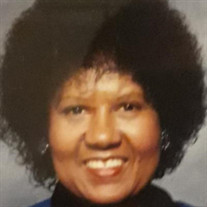 DAISY HAIR WILLIAMS, born on April 14, 1938 was the seventh of nine children born to the late Nathaniel Hair and Mollie Melvin Hair. She entered into eternal rest on Wednesday, December 16th at Cape Fear Valley Medical Center. She was preceded in death by six siblings: Gracie, Lula Mae, Pearly, Cary, Paul, and Hazel. Deaconess Daisy H. Williams received her early education in the Cumberland County Public Schools, graduating with honors from Armstrong High School, class of 1957. She then matriculated to Livingstone College in Salisbury North Carolina where she earned a Bachelor of Arts in Early Elementary Education; graduating with honors and salutatorian of her class in 1960. While attending Livingstone College, Sister Daisy joined Alpha Kappa Alpha Sorority Incorporated. On September 10, 1959 she was married to Claxton Ford Williams. They are the parents of one daughter, Joan Laurette Williams. At a very tender age, she gave her life to Christ and joined (then) First Baptist Church of Cedar Creek, (now) Greater First Baptist Church, Fayetteville North Carolina. This is where she began her spiritual walk with the Lord and received her early Biblical training. She was a great supporter of Sunday School, and believed to deepen ones walk with the Lord, that all members should participate. Deaconess Williams was very active in service to God, His Church, and humankind. Her service and ministry engagements were so numerous, we will only name the ones that we are currently aware of: Deaconess (1986 until her passing); Finance Secretary (her tenure spanned three pastoral administrations: Rev. Dr. H.L. Moore, Rev. Dr. N.P. Brodie, and Rev. Cary Jonathan Melvin, BS, MDIV, DCPE) for more than a combined forty (40) plus years; Trustee; Senior Choir; Sunday School; Usher, and one of her most treasured ministry was her active involvement with the Cedar Creek Learning Center (CCLC), here she worked alone side the late Rev. Dr. Robena McLaurin, and many others. This summer learning enrichment program assisted children from the church and communities in strengthening their overall academic performance. In addition, Sister Daisy received the treasured title of Woman of The Year (1993). Consistent with most great servants, Sister Daisy participated on the State and National levels (General Baptist State Convention and Lott Carey Home and Foreign Convention). Deaconess Daisy Williams was employed as an Elementary School Teacher for more than thirty (30) years. Her tenure spanned two counties (Columbus, and Bladen). In 1993 she retired from the Bladen County School System (Plain View Elementary) and was honored along with other educators at the Spring Banquet of the Bladen County Association of Educators. She leaves to cherish loving memories, her husband and partner if life Claxton Ford Williams, one daughter, Joan Laurette Williams, two sisters, Bertha Lee (Douglas Sr.) and Ella Avant, all of Fayetteville North Carolina; several brother/sister in laws, and a host of nieces, nephews and friends. “Well Done Thy Good and Faithful Servant”

The family of Mrs. Daisy H Williams created this Life Tributes page to make it easy to share your memories.

Send flowers to the Williams family.