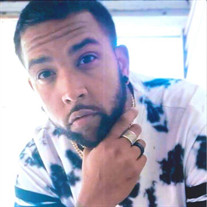 Darrel Jamal Wilson passed away on March 9, 2021. He was born May 4, 1985 in Fayetteville, NC. Since the age of 6, DJ enjoyed traveling to Brooklyn, NY where he spent time with his grandmother Janie Cruz every summer. He loved the outdoors and spent most of his time fishing. By the age of 8 years old, he was inspired by his older brothers’ gift in music. As he got older, he realized that music would be his career. Listening to his brothers rap when they tried to include him, he would always use the phrase “No Way”, which ended up being used as his ad-lib in his songs. At that point he became a member of Darkside Camp Music Group, where he would later go on tour with names like Rick Ross, Lil Wayne and Pastor Troy, just to name a few. Darrel was never a person to give up and was determined to follow his dreams and make everyone proud. While pursuing his dreams he met the love of his life Preciosa Thomas, whom later became Preciosa Wilson. Together, they had three beautiful children. Darrel and Preciosa remained together for 15 years and were married for 11 years. He expressed that his family always made him a better person. If you knew Darrel, DJ, 30, or Upsouth Thirty, then you understand his unconditional love for his family and friends. He leaves to cherish his memory his loving wife, Preciosa Wilson; four daughters, Zanivyyah Wilson, Promise Wilson, Dream Wilson, and Makenna Smithwick; one son, Darrel Wilson Jr.; his mother, Mary Beard; father, Dennis Wilson; two brothers, Calvin Beard and Shaun Beard; one sister, Sierra Wilson; grandparents, Janie and Frank Cruz. He also lives through 40 nieces and nephews, and a large number of aunts, uncles, and cousins.

Darrel Jamal Wilson passed away on March 9, 2021. He was born May 4, 1985 in Fayetteville, NC. Since the age of 6, DJ enjoyed traveling to Brooklyn, NY where he spent time with his grandmother Janie Cruz every summer. He loved the outdoors... View Obituary & Service Information

The family of Mr. Darrel Wilson created this Life Tributes page to make it easy to share your memories.

Send flowers to the Wilson family.