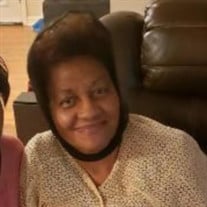 Delores Curtis was born in New York City, New York to the late Rufus Curtis, Sr. and Margaret Curtis Hicks on August 8, 1937. Delores was affectionately known as “Dee Dee” grew up in the Cedar Creek community. She confessed Christ at an early age and joined the First Baptist Church of Cedar, now know as Greater First Baptist Church. She was educated in the Cumberland County School System. Delores left Fayetteville, NC and transitioned to New York City, New York. She was a talented and blessed woman. She experienced many accomplishments during her life. Her most rewarding accomplishment was becoming a mother of two sons, Tyrone and Quentin. Among her other accomplishments was a license cosmetologist, radio announcer, and a seamstress. ‘ While living in New York City, she joined the Greater Refuge Temple Holiness Church, located 2081 Adam Clayton Powell, Jr. Blvd., under the leadership of the late Bishop Bonner. Delores was an exceptionally active member of Sanctuary Choir and was very instrumental in making all the choir robes for the choir. She was also an outstanding member of the Prayer Ministry who consistently prayed daily for the wellbeing of all lives. She is survived by two sons, Tyrone Curtis and Quentin Tracey Curtis of Fayetteville, NC, two brothers, Rufus Curtis, Jr. of Greensboro, NC, Robert Lane Hicks (Connie) of Raleigh, NC, two sisters, Quadlene Patricia James and Corneila Williams of Fayetteville, NC, two grandchildren, six great grandchildren, a host of nieces and nephews, relatives and friends. He that dwelleth in the secret place of the most High shall abide under the shadow of the Almighty. I will say of the LORD, He is my refuge and my fortress: my God; in him will I trust. Surely he shall deliver thee from the snare of the fowler, and from the noisome pestilence. He shall cover thee with his feathers, and under his wings shalt thou trust: his truth shall be thy shield and buckler. (Psalm 91:1)

The family of Ms. Delores Curtis created this Life Tributes page to make it easy to share your memories.

Delores Curtis was born in New York City, New York to the late...

Send flowers to the Curtis family.