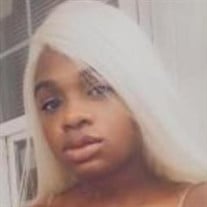 Eddie Tart IV was born October 10,1994 in Charlotte North Carolina to Samona Thompson & Eddie Tart III. September 28, 2021 he gained his wings for heaven. Eddie, &#8220;aka Erica&#8221; grew up in Georgia and in North Carolina where he attended... View Obituary & Service Information

The family of Eddie Tart IV created this Life Tributes page to make it easy to share your memories.