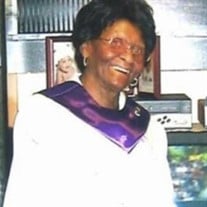 Ms. Ethel Frances McMillon, daughter of Dave Long and Annie Lipscomb slipped quietly and peacefully away in the early morning of Wednesday, April 28, 2021, in her home in Fayetteville NC. She was born in Durham, North Carolina, on October 3,... View Obituary & Service Information

The family of Ms. Ethel Frances McMillon created this Life Tributes page to make it easy to share your memories.

Send flowers to the McMillon family.