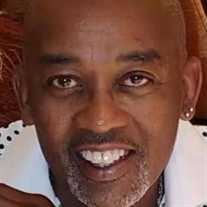 Brother Gregory Christopher Scriven, Sr., son of the late Booker T. Scriven and late Winnie Scriven Pender, was born on May 5, 1961, in Wilson, North Carolina. He peacefully transitioned from this life to eternal rest on Saturday, October 16, 2021, at his residence. Gregory, Big Greg, Uncle Bud, Johnnie Pearl, Papa Spikey and OG, as he was affectionately known, was the youngest of three siblings. At the tender age of five, Gregory's mother purchased him a toy guitar and bongos. Ten years later, she bought him his first electric guitar at the age of fifteen. Gregory's passion for playing the guitar amplified beyond his wildest dreams. Gregory attended Wilson County Schools. During his adolescent years, he joined and played with his first high school band, the Funkateers. Gregory also played with the gospel group, Gerald Hunter and the Ladies of Gospel at the age of fourteen. In 1979, he graduated from Fike High School. Following graduation, Gregory attended Wilson Technical College and graduated with a degree in electrical installment maintenance on June 12, 1980. A year later, Gregory enlisted in the United States Navy on December 28, 1981, as a Plank Oiler on the USS Williamette, a fleet replenishment oiler (A0-180). The military tour allowed him to travel around the world to Korea, Pearl Harbor, Hawaii, just to name a few. Gregory separated from his military career with the United States Navy on December 27, 1985, as an (E-3). Gregory pursued and followed in the medical field as his mother. He worked as a nursing assistant at the Eastern North Carolina Special Care Center in Wilson, North Carolina. Gregory later joined the Veterans Health Administration January 1991 in Fayetteville, North Carolina. He worked tirelessly and faithfully as a Podiatry Technician. This career expanded him to explore work in different departments such as the Eye Clinic, Tango Clinic and Psychiatric Ward. Upon the construction of a new VHA facility on Raeford Road, Gregory was transferred from the VHA on Ramsey Street to the new location. He was a hard worker, team player, loved people, especially his veteran podiatry patients, enjoyed coming to work every day to work and communicate with the doctors, nurses, co-workers, and policemen. Anyone Gregory encountered, he always resonated an inspirational personality, an illuminated smile, he was full of laughter, and all were special in his eyes. He dedicated his service to the Veterans Health Administration for 34 years until his demise. Gregory joined Wilson Chapel Freewill Baptist Church, Wilson, North Carolina at an early age. He later joined Good Hope Missionary Baptist Church, Fayetteville, North Carolina under the leadership of his late Father-In-Law and Pastor, Dr. Samuel McDonald, Jr. He served as the church lead guitarist from January 1991 to October 26, 2014. Because of Gregory's love for music and earnestly playing his guitar, his musical career advanced to a higher level. The acoustic and rhythmic guitar style he created was profound and lead him to excel in different genres of music. He played with a group named Creations, of Wilson, North Carolina. Gregory also played with Willis Pittman and the Burden Lifters, of Richmond, Virginia. They traveled from the east, west, north, and south of the United States for several years. Gregory joined the McDonald Sisters band as the lead guitarist in 1988. He was the band leader and always gave a 100% plus to keep the music intact and other musicians abreast of any musical challenges. Travelling with the group on the bus in the United States, enjoying airline flights with the group to concerts and experiencing life internationally in other countries flourished the ministry to a height only GOD could approve to exist. Gregory took a 7- month sabbatical from the group and played with the late Clarence Fountain and the Five Blind Boys of Alabama. He travelled to the countries of Austria, Switzerland, France, etc. The musical career landed him an opportunity to travel to Beverly Hills, California. There the Five Blind Boys and band completed a filming on the American Drama Series Sitcom 90210. Gregory returned to the McDonald Sisters Band and was a faithful member of 30 years until his death. In his recreational and spare time, he would play with bands such as Big Bertha, Soul Decree and Radio Box. This included events at Festival Park in Fayetteville, North Carolina, wedding venues, and other social events in other cities and communities. Gregory Christopher Scriven, Sr., memories will always be cherished by the Love of His Life, Deborah McDonald Scriven, his wife of 30 years and 8 months (Parkton, NC); three adult children of their union- (two sons & a daughter) - Gregory C. Scriven, Jr. of the home, Terrance J. Scriven, of Red Springs, NC, and Priscilla R. Scriven, of Parkton, one sister, Mattie Scriven, of Wilson, NC, one brother, Booker T. Scriven (Judy), of Hastings, Nebraska, a special niece, Carmen Scriven Holmes, of Wilson, NC, three god sisters and one god brother. Karen Whichard (Al), Dr. Mildred Summerville, all of Wilson, NC and Dr. Rose Mae Percer (Lonnie), of Fayetteville, NC; He also leaves four grandchildren, Teniya Scriven, Zayden Scriven, Kanye and Kyrin Locklear whom he adored with all his heart: Gregory leaves his loving mother-in-law, Priscilla McDonald (late Dr. Samuel McDonald, Jr.), Eight sisters-in-law and eight brothers-in-law, Shermaine Evans (Sylvester, Minister) of Washington, D.C., Cheryl Fuller of Fayetteville, NC, Dr. Valerie R. McDonald, of Fayetteville, NC, Dr. Pamela M. McClain (Rudie), of Parkton, NC, Dr. Evelyn M. Miller (Jimmy, Pastor), Joy Garrett Boone (Nathaniel), Samuel E. McDonald, III (Nancy) of Parkton, NC, Dr. Michael W. McDonald, of Fayetteville, NC, Maurice L. McDonald (Cassandra), of Parkton, NC and Jeffrey Bryant, of Lillington, NC; along with a host of nieces, nephews, relatives, friends, and co-workers in the music industry too numerous to name. All who knew Greg came to love him and the positive demeanor he possessed at home as a husband, father, grandfather, co-worker and in the music arena. We thank GOD he blessed us to have him in our lives.

The family of Mr. Gregory Christopher Scriven Sr. created this Life Tributes page to make it easy to share your memories.

Send flowers to the Scriven family.