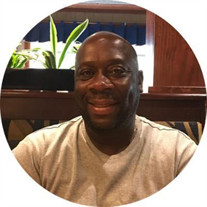 Lionel Maurice Lee, 55, was born in the Bronx, New York to his beloved mother, Peggy Joyce Lee on October 2nd, 1965. Lionel was known affectionately to his friends as “L-Train.” Lionel was educated in the New York City Public School System. He graduated from Alfred E. Smith High School, in the Bronx, New York. It was there at Alfred E. Smith, where he developed a love for things that would describe him as being a “handy man”. Lionel was a beloved son, brother, father, uncle, cousin and friend. His smile and dimple lit up a room. He was funny, had a great sense of humor and enjoyed making people laugh. Lionel worked professionally as a Licensed CDL Driver, Forklift Driver and Material Handler. Lionel was a hard worker. Prior to his death, he was employed at Smithfield Foods. He worked previously at Purolator, Access-A-Ride and the Coca Cola Bottling Co. He was known by his coworkers for being kind, gentle and funny. He hardly ever missed a day of work, worked overtime, was reliable and dependable. He didn’t make excuses. He always showed up. Lionel loved to dress to impress. He was known most for his impeccable New York fashion and style. A true son of 1980’s New York City, he loved to wear his gold jewelry, necklaces, bracelets and rings. He was the definition of “cool” and “fly”. He also loved to have fun. His children, nieces, nephew and their friends could always count on him to take them to all of the fun places: Rye Playland, Coney Island, Six Flags, Sesame Place, the bowling alley and movie theatre. He also enjoyed going to comedy shows, concerts, live plays and traveling. Lionel gave his life to Christ when he became a member of the Love Fellowship Tabernacle Church in Brooklyn, New York, under the leadership of Bishop Hezekiah Walker. While in Fayetteville, he was a member of the Destiny Now Church. He served the Lord, participated in the Men’s Ministry and had a few roles in church plays. He loved God and was not ashamed to tell the world about it. He knew how to pray and did so willingly! Lionel was most proud of his two daughters, Raven and Tiffany. He spoiled them rotten from childhood to adulthood. He was not just their father, but their best friend. He loved to talk about them and just how much he loved them. Lionel was truly liked and loved, and his physical presence here on earth will be missed for years to come. Lionel died of natural causes on January 2nd, 2021. He leaves to cherish his memory, daughters, Tiffany Lee Jefferson (Andre), Richmond, Virginia; Raven Lee, Washington, NJ; mother, Peggy Lee, Bronx, NY; brother, Jason Lee, Bronx, NY; sister, Desiree Harrell, Bronx, NY; nieces, Jenise Harrell, Bronx, NY; Rebecca Jones, Bronx, NY; nephew, Jason Jones, Bronx, NY; aunt, Dorothy Lee, Landover, MD and a host of cousins and extended family. He was proceeded in death by his maternal uncles, Leroy Lee, Alfred "Ben" Lee, Cleophus Lee, Raymond Lee, cousin, Rodney Lee, grandmother and grandfather, Lucy Vick Lee and Julius Lee, great grandmother and father, Blanche Vick Lee and Lonnie Vick.

Lionel Maurice Lee, 55, was born in the Bronx, New York to his beloved mother, Peggy Joyce Lee on October 2nd, 1965. Lionel was known affectionately to his friends as &#8220;L-Train.&#8221; Lionel was educated in the New York City Public School... View Obituary & Service Information

The family of Mr. Lionel Lee created this Life Tributes page to make it easy to share your memories.

Send flowers to the Lee family.