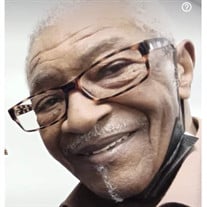 I have fought a good fight, I have finished my course, I have kept the faith: Henceforth, there is laid up for me a crown of righteousness, which the Lord, the righteous judge, shall give me at that day. 2 Timothy 4:7-8 (KJV) Martin Edward... View Obituary & Service Information

The family of Rev. Martin Edward Boone created this Life Tributes page to make it easy to share your memories.

I have fought a good fight, I have finished my course, I have...

Send flowers to the Boone family.