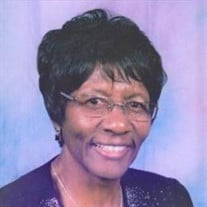 Sister Mary Frances Thompson Taylor (77) entered into this life on August 7, 1944 to the late Mr. R.D. and Mattie Currie Thompson. She departed this life and entered into eternal rest on March 18, 2022. Sister Mary Thompson was educated in the Proctorville High School. She was second highest in her class and was elected as Salutatorian even though she went to school late because of having to work in the fields. Sister Mary met Alexander Taylor and they entered into holy matrimony on December 23, 1962. They lived in New York City and after many years moved back to North Carolina. She was employed as Payroll Secretary at Universal Packaging Company now known as Graphic Packaging International Company of Lumberton North Carolina until she retired. Sister Taylor accepted Jesus Christ into her life and joined New Hope Missionary Baptist Church. Sister Taylor was sick but she made sure that the church books were balanced to the penny and all church records updated and filed. She was a dedicated and faithful disciple even when her health declined. She served as Church Secretary, Pastor Aide President, in the Finance Ministry, on the Usher and Kitchen Ministries, Senior Choir Treasurer and Parliamentarian. Even though her voice was soft and kind, she was able to keep order by reminding the choir members that our service is to God and not to man. She served the New Hope Missionary Baptist Church Family with wisdom, knowledge, and understanding. We will miss Sister Taylor’s words of encouragement lifted from 1 Thessalonians 4: 11, “And that ye study to be quiet, and to do your own business, and to work with your own hands, as we commanded you; “ Sister Mary was preceded in death by her father and mother; R.D. and Mattie Thompson, her father-in-law and mother-in-law; Nathaniel and Lillie Bell Taylor, her sisters; Betty Thompson Williams and Carolane Thompson McCrae, her brothers; Robert Thompson (Bob) and Gerald Thompson; a grandson Tydreck Williams, a great-nephew: Effice Lamont McNeill and a cousin; James Bradford. She leaves to cherish her memories, her husband of 59 years, Alexander Taylor of the home; two daughters; Octavia Taylor of Los Angeles, California and Saleda Taylor of Fairmont, North Carolina; two sons; Morris Kent and Ricky Williams both of Fairmont, North Carolina; four sisters; Sister Alice Campbell of Fairmont, North Carolina, Rev. Joyce( Ellis) Hill of Lumberton, North Carolina, Sister Virginia (Timmy) Nealy and Sister Angela Thompson both of Orrum, North Carolina; six brothers: Charles (Dawn) Thompson of Newark, New Jersey; Levaster Thompson(Boot) of Philadelphia, Pennsylvania; Rev. Tommy Thompson of Orrum, North Carolina; R.D. Thompson, Jr.(June Bug) of Lumberton, North Carolina; Elder Randy (Sylvia) Thompson of Fairmont, North Carolina and Preston(Grace) Davis of Little Rock, Arkansas. One sister-in-law; Mary (Paul) Shipman of Fairmont, North Carolina; two brothers-in-law; Willie(Irene) Taylor of Lumberton, North Carolina and Nathaniel Taylor of Fairmont, North Carolina. She also leaves eleven grandchildren, sixteen great-grandchildren and one godson; Kendrick (MooMoo) Thompson and a host of other relatives and friends Professional Services entrusted to - Colvin Funeral Home and Cremations, Lumberton, NC.

Sister Mary Frances Thompson Taylor (77) entered into this life on August 7, 1944 to the late Mr. R.D. and Mattie Currie Thompson. She departed this life and entered into eternal rest on March 18, 2022. Sister Mary Thompson was educated in... View Obituary & Service Information

The family of Mrs. Mary Frances Taylor created this Life Tributes page to make it easy to share your memories.

Send flowers to the Taylor family.