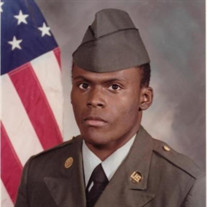 Robert Lee Davis, 58, of Spring Lake, North Carolina passed away unexpectedly on November 10, 2020 at his home. Robert was born October 31, 1962 in Fayetteville, North Carolina to Annie Stroud and the late Watha Lee Davis. He is survived by his mother and two sisters, Mary L. Manuel (Herbert) of Greensboro, North Carolina and Evaline Smith of Spring Lake, North Carolina. He is predeceased by his father and sister, Rosa Marie Owens. Robert graduated from Western Harnett High School and thereafter, served in the United States Army. During his enlistment in the military, Robert was able to enjoy an overseas tour in Germany and several other service locations. He dedicated over 20 years of his life as a security guard at Magneti Marelli in Sanford, North Carolina. Robert later worked at Pilgrim Pride Processing Plant for the last few years of his working career until he was medically retired. He was known for his infectious laugh, which often occurred when he was jokingly “picking” at someone. Although he loved to joke around with people, his alone time was important to him. He enjoyed watching television and sports, playing video games, listening to music, and had a special interest in different types of sports cars. Robert leaves behind to cherish his memories a loving family; an uncle, Richard McLaurin; an uncle, Luther Davis (Eunice); an aunt, Linda Yeomans; an aunt Joann Lee; one nephew, Eric Ellerbe; a niece, Thessalonia Bradshaw; a niece, Ursula Neal; a niece, Batrina Davis; a niece, Phyllis Williams; a niece, Christine Manuel; a long time childhood friend, Donald Carroll; and a host of great nephews, great nieces, cousins, special family members and friends.

Robert Lee Davis, 58, of Spring Lake, North Carolina passed away unexpectedly on November 10, 2020 at his home. Robert was born October 31, 1962 in Fayetteville, North Carolina to Annie Stroud and the late Watha Lee Davis. He is survived by... View Obituary & Service Information

The family of Mr. Robert Lee Davis created this Life Tributes page to make it easy to share your memories.

Send flowers to the Davis family.